I didn't do a holler walk today because I had a seminar in Knoxville this morning. When I got home, however, I found a very interesting visitor near the door: 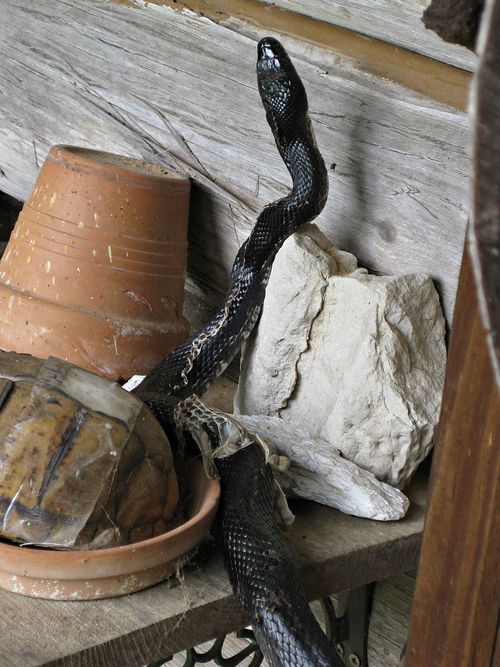 I've seen rat snakes in previous years when they are shedding their skin -- usually they've been on the rain gutter or around a door. This one was on a shelf where I keep a few rocks. I'm not sure I would have noticed it if both cats hadn't been sitting together staring at something and switching their tails. When I followed their gaze I saw the snake.

One year one of these got inside. I heard some noise in the blinds on the door nearest the section of gutter where I often see them. When I went to invesitgate, I saw a large rat snake winding through the slats, with its head already at the level of the door knob. I waited for it to crawl down a little further, then reached around it and opened the door. It crawled back outside then, though a little too slowly for my liking. The next day I saw it around the gutter. After another day or so it disappeared, leaving only some shreds of skin to affirm that I had not imagined it all.

I used that same door to my advantage on another occasion. One night I heard something in the bedroom blinds -- turned out to be a bat. When I got up, he began flying around. I waited until he went out toward the living room, then opened the door. When he came back he went right out the door.

This winter I used a sliding door at the back of the house to let a bird out. It came in one night through the pet door, I think, and flew right up onto my arm. It was a wren...so small and light and soft-looking. It flew away when I moved, and spent the rest of the night alternately flying around and resting. The cats and my border collie kept their eyes on it but didn't try to go after it.

I figured it was no use trying any rescues until morning, but I had no idea how I was going to help it get back outside without a dog or a cat impeding progress. I mainly hoped it would stay out of their reach until I had a chance to try.

When I woke up in the morning, the bird was already flying around a bit. I kept track of its location while I hatched a plan, which came in a flash of inspiration. As soon as I saw morning light beyond the windows, I opened the back sliding door, making sure the panels of the blinds covered any part of the glass door that would not be open. As I crossed back across the room to where the wren was clinging to the log wall, I turned off the lights. I finally got close enough that he flew away from me, straight toward daylight and out the door. Awesome!

Posted by Cathie Bird on 07 May 2011 at 07:48 PM in Birds, Cumberland Mountains, Reptiles, Tennessee | Permalink

I'm afraid of snakes! Back when I had a vacation in Uncle Carl's farmhouse, I saw one slithering out from the rain gutter. I screamed like a little girl! I wish one day, I'll overcome my fear of snakes...