In my house in the holler today: Herald Moth

I woke up this morning to find this amazing moth under the handle of a spoon: 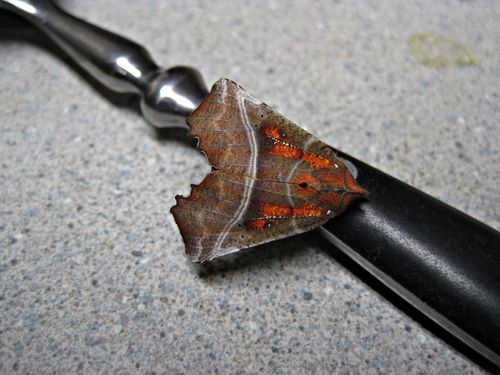 Herald moth adults often overwinter in cool, dark places such as caves or barns (or cabins with lowered thermostats in a holler?), and emerge from March to June. I'm wondering if this one spent the winter with me or came in with the dogs through the pet door. One of its main food plants is the poplar, of which I have several near the house.

And here are two short videos I got yesterday of an eastern phoebe hunting bugs around the porch. I'm guessing this is one of the young porchlight phoebes:

I also got a short video of what I think was a yellow-throated warbler who came to do some bugging after the phoebe left. Unfortunately it was not a sharp image so I decided not to process it for YouTube.

I found an interesting article at Planet Earth Online about the Seychelles warbler. Research on a population of these warblers on Cousin Island shows that chicks of this species living in island environments may have extra help from relatives other than their parents:

Brouwer and her colleagues considered two possible reasons why helpers are so beneficial right through life. It may be that the chicks get more food, and therefore have a greater body mass when they fly the nest. As heavier chicks have a better chance of survival, the additional food may have a long-lasting benefit.

Alternatively, by bringing more food to the growing chicks, chicks may not have to forage as much. The reduction in foraging effort required by the chicks keeps them safe from damage to their cells, which could cause later diseases. Further research is needed to test these ideas, so research is continuing in the Seychelles.

The research paper can also be downloaded free at PLoS One:

Helpers at the Nest Improve Late-Life Offspring Performance: Evidence from a Long-Term Study and a Cross-Foster Experiment

Posted by Cathie Bird on 22 May 2012 at 05:03 PM in Birds, Butterflies and Moths, Global projects, Phenology, Tennessee | Permalink