« Out in the holler: Dafodil leaves and tracks in the mud | Main | Out and up in the holler: white-tailed deer, yellow violets, trillium, jewelweed »

Out in the holler, the bird is the word

The spring shift in the holler continued these past two weeks with some notable bird sightings and events.

Male songs among the cardinals and chickadees have multiplied since I first heard them around the 25th of February. I still hear (and occiasionally see) the blue jays as well.

On March 2nd I heard my first phoebe call of the season, but the rest of that week I only heard them down around my neighbor's barn. By March 7th, however, I was hearing them up at this end of the holler, and on the 8th I heard a "chatter" call near the nesting site on my porchlight. Today I heard a series of these sounds near the porch, and possibly saw shadows of their first flights to the nest itself from my window. The blinds were down, though, and I wasn't able to see who it was for sure...but definitely a bird. You can check out the chatters at Cornell's All About Birds site: scroll down the eastern phoebe sounds page to the chatter recordings.

During the last snow, white-throated sparrows, tree sparrows, a female cardinal, and the eastern towhee group spent quite a bit of time in the nut-drop zone of Beech1 (an American beech I observe for Nature's Notebook). I got a photo of a male and a female through my study window: 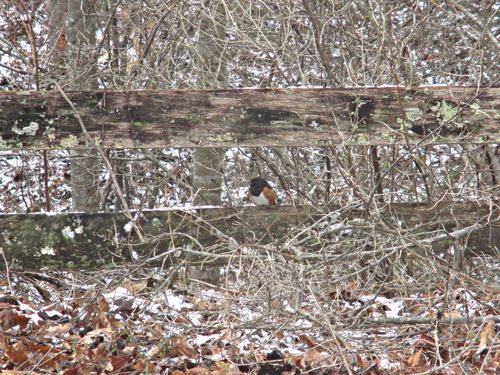 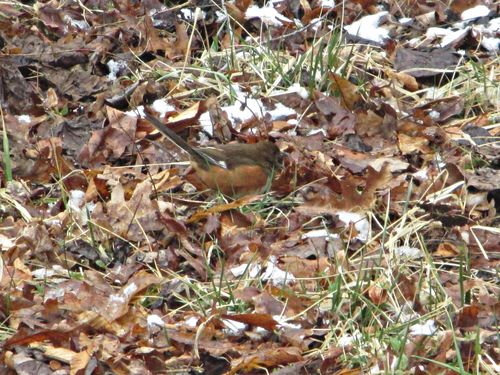 On March 6th I saw two different kinds of hawks -- a red-tailed hawk, and possibly a red-shouldered hawk (by the sound of it). That same day I saw a great blue heron, twice! It hung out for quite awhile near Hudson Branch and one of the man-made ponds in the holler. I used to see herons more often before the beaver dams were wiped out in a huge rain event a few years ago, but I still see them once or twice a year up at this end of the holler.

On the plant side of holler life, more dafodils are up, and the orange day lily leaves have emerged. Many of the multiflora roses now have a few new leaves to go along with the thorns.

Spring is so awesome! Today it's sunny and warm, and I have the window open for the first time this year. I love to blog to the sounds of the holler.