The red efts are on the move!

Coming across a red eft on my holler walks makes me happy. They are so small that finding one can seem almost magical or mystical. Today I saw two!

The first was smaller and moving through a darker part of the holler, so catching a photo while simultaneously trying to keep my almost-blind Walker hound from stepping on it was an extra challenge: I found the second one further up the lane, closer to the house. It was larger and not quite as skittery as the first one: 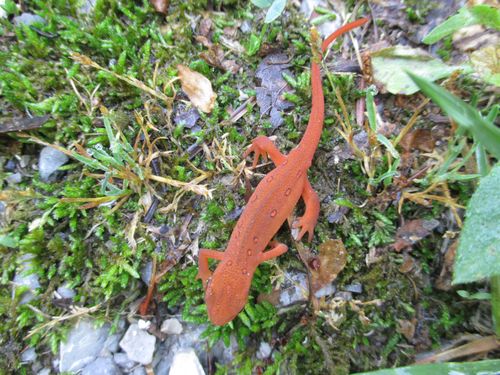 Red efts are the juvenile, terrestrial form of the eastern newt (Notophthalmus viridescens). They live in places like my holler that have wet forests and aquatic environments such as ponds, lakes or streams. Red efts are known to travel great distances beyond the areas where they came into being. This strengthens the species as a whole because it leads to greater genetic diversity.

I've never seen the larval or adult stages of this newt, but this is what they look like:

Within the past two weeks I've also seen a broadheaded skink and a  young eastern 5-lined skink here at the house. They like to hang out around my herb and flower planters.