« Out in the holler: Wood Thrush | Main | Pickerel Frog »

Sights and sounds in the holler: birds, butterflies and bullfrogs

Many different bird species live here in the holler. Usually I hear them more often than I see them.

This week, though, a pair of Carolina wrens poked around in my planters for several minutes -- both of my cameras were in another room, otherwise I could have gotten some good photos. Later, a female ruby-throated hummingbird visited the planter phlox.

That same afternoon I happened to spot a common yellowthroat male in the grass along the driveway, and watched him catch a small green worm. I think I may have seen the female earlier in the day, but couldn't get a positive ID because she stayed in the trees and was partially concealed by foliage the whole time. I think this pair has a nest nearby. 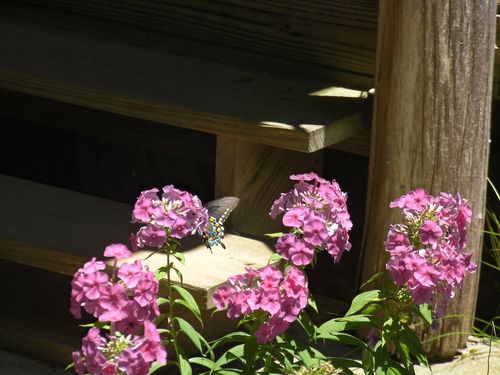 And what a great week for butterflies! Now that the Echinacea is flowering and my planter phlox continues to bloom, I can see awesome butterflies almost any time I look out my window. As the week began I saw a great spangled fritillary and a spicebush swallowtail. A few days later, a pair of Diana fritillaries came to feed.  On July 4th I got photos of the first pipevine swallowtail I've seen this year, and one of my favorite skippers, Ancyloxypha numitor, the Least skipper. 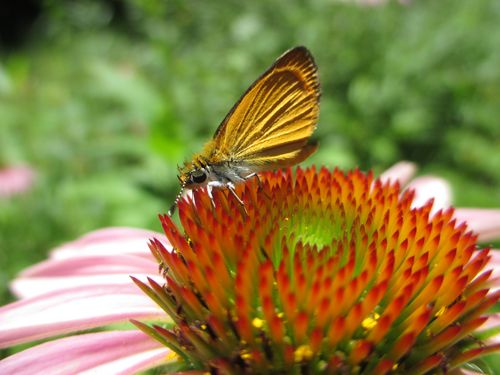 Here's a short video of the pipevine swallowtail:

While I was finishing up this post, I was able to verify who has been pecking on my house lately:

I think this female hairy woodpecker is one of a pair nesting nearby in the Frog Pond Hollow drainage. I saw both of them looking for bugs on a tree last week, and suspected they might be the ones responsible for recent (and sometimes annoying) percussion solos. I'm not sure why, but it's somewhat less annoying now that I've made a visual connection with the drummer.

As a finale for this post, here's a video with a mix of holler sounds on June 20, 2014. Since the birds are not visible, I'll hyperlink each species to its sounds page at Cornell Lab of Ornithology's website. This will help distinguish the calls if you are not already familiar with them. In the first minute of the video, songs of the white-eyed vireo followed immediately by a wood thrush are prominent. At about 1:16, the bullfrogs add their voices. A common yellowthroat joins in around 2:47.

By the way, for a fun game, check out Bird Song Hero at Cornell Lab of Ornithology.