« The holler's violet family | Main | Out in the holler: Red Admirals and other butterflies »

In the (almost) five years that I have been recording phenophases at Nature's Notebook, I've developed a deep personal connection with the individual plants and animals I observe. This is especially true for the trees and forbs on my list, many of which are the same individual year after year.

Such is the case with Trillium1. I missed its emergence this year, finding it first on April 4th by which time it had leaves and a bud: 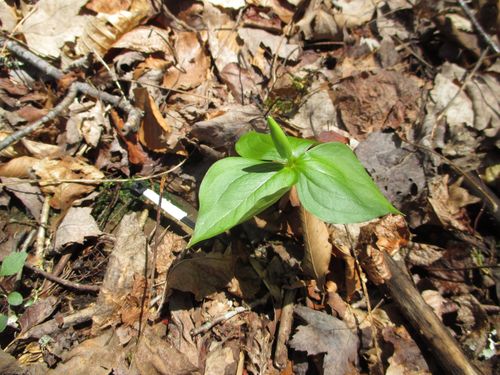 Trillium grandiflorum. The marker I placed when I began observations of Trillium1 is visible to the left of the plant. [Photo: Cathie Bird]

Four days later, April 8th, the bud opened, and, on April 11th, I brought a new marker that would be more visible from my route through the holler. Before I placed it, I leaned my walking stick against a small tree nearby and took this photo: 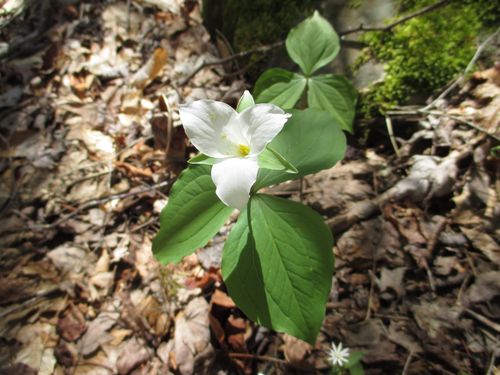 Generally, for all non-woody plants I observe, I have picked individuals in safe spots. They're far enough away from the edge of the lane that I won't accidentally mow them down or step on them but not so far off the road that I have to tromp on a bunch of other plants to get to them.

Trillium1, however, grows on the banks of Hudson Branch, farther off the track than any other plant I observe. I try to put my feet in the same places each time I visit to minimize harm to other species growing between the road and Trillium1.

Closer to this plant, the forest floor gets more rocky and uneven. When I'm observing it, I always have my walking stick, and sometimes use smaller trees along the way to steady myself. I get close enough to see what I have to see, but usually no further.

To plant the new flag, however, I had to get right next to the plant. I'm not sure how it happened, but as I stuck the flag pin in the ground, my walking stick came crashing down from behind the tree where I'd propped it and snapped Trillium1's stem in two places.

Ouch, ouch and triple ouch! I felt as if I'd broken myself as well as Trillium1. The leaves were now upside down with the flower underneath. The fractures looked so bad -- and two of them, no less -- that I figured Trillium1 was a goner. The riparian zone of Hudson Branch, a headwater stream of the Cumberland River. This is the general neighborhood of 2 trilliums and 2 Virginia springbeauties that I observe for Nature's Notebook. The white flag in the center of the photo marks the location for Trillium2, a plant I added on April 11 after I broke Trillium1 and thought it would die. [Photo: Cathie Bird]

In a way I wish I hadn't been so devastated that I couldn't take a photo of the broken stem, because it would have better documented the awesome recovery that took place over the next few days. I kept recording the presence of the flower which continued to be visible and definitely not wilting. By the 17th or 18th of April, Trillium1 had mostly righted itself: both leaves and flower appeared to be stable and vital.

On April 20th, I took the photo below. The flower seemed to be moving through the normal aging process, with some shrinkage, softness and translucence of the petals beginning to appear: 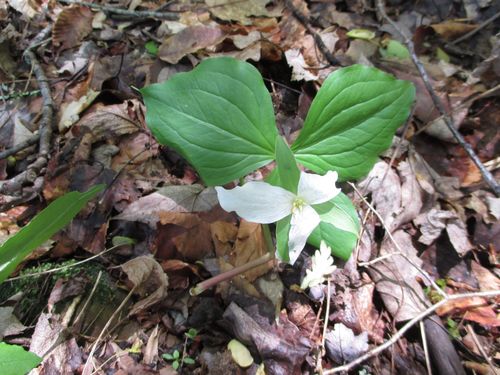 It may have been last year or the year before that Trillium1 apparently was eaten by something, so this was not the only significant trauma it's ever suffered. I'll continue to watch this amazing plant until its done for the season. The next phenophase shifts I'll look for are disappearance of the flower and development of a mature fruit.

Here's a photo I got yesterday, April 25th: 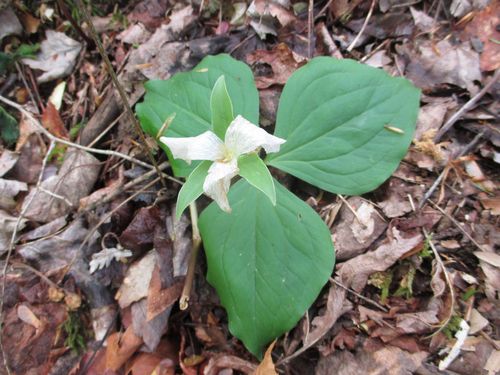 Trillium1's flower is showing its age here. I'm guessing it will be gone completely in a few days. [Photo: Cathie Bird]

My experiences with Trillium1 this spring have left me with many thoughts, not only about how I engage with other life forms, but also about resilience and possibilities for healing from the physical, mental, emotional and spiritual fractures that life in this material dimension of Earth imposes at times.