One Season in the Life of a Trout Lily

I recently completed my fifth year as an observer for Nature's Notebook, a project of the USA-National Phenology Network. Of the species I track, 8 of them are flowering plants that include Erythronium americanum, or Yellow Trout Lily (aka American trout-lily, Dogtooth violet, Eastern trout-lily, Adder's tongue).

Trout lilies grow in colonies that can be very old, spreading both by seeds and by runners from corms. 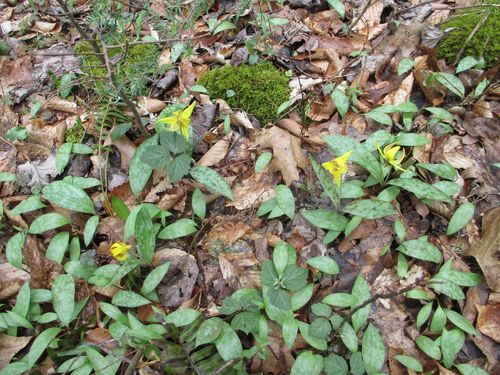 A very small portion of DTV1's colony; DTV1 (a nickname for data record purposes) is near the right edge of this photo. This photo shows many younger plants with a single leaf, and several older, fertile plants with flowers, April 8, 2015  [Photo: Cathie Bird]

When conditions are right, a significant stretch of land between the edge of my lane and the west bank of Hudson Branch (a headwater stream of the Cumberland River) is pretty much carpeted with them. Most of them are single leaves that won't produce flowers for several years. I'm guessing this stretch of the holler had 100-150 trout lilies blooming this year, and some of them are quite large by now.

This was a great year for DTV1 and for me: it was the first time I recall catching all of its phenophases, from leaves up to seeds out. So, here's an image and narrative caption summary of what I saw and learned about trout lilies this spring. 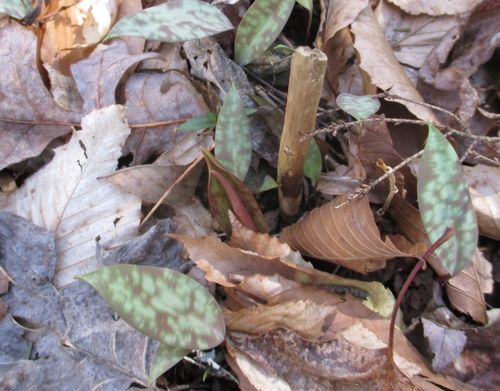 I saw leaves emerging around my marker on March 24th. DTV1's first leaves emerged sometime between my observations on March 28th and March 29, 2015. It can be difficult with colony species to know if you are looking at the same individual year after year. I'm pretty confident that for at least the past two or three years I've been observing the same plant. [Photo: Cathie Bird] 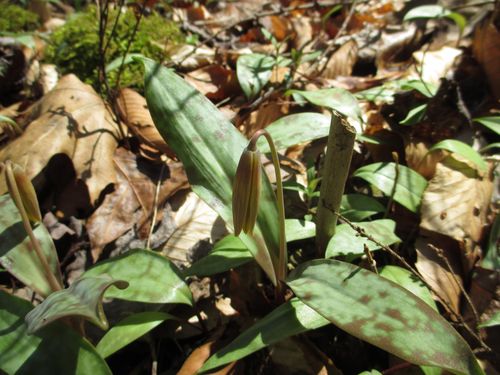 I found a flower bud on April 2nd, but did not have my camera. In this April 4th photo, it's closer to opening. I took this photo around noon, so guessed it had not opened at all yet as these flowers typically open in the morning and close at night. We had some very low night temperatures during this time but DTV1 and its colony mates stayed warm enough to keep going.  [Photo: Cathie Bird] 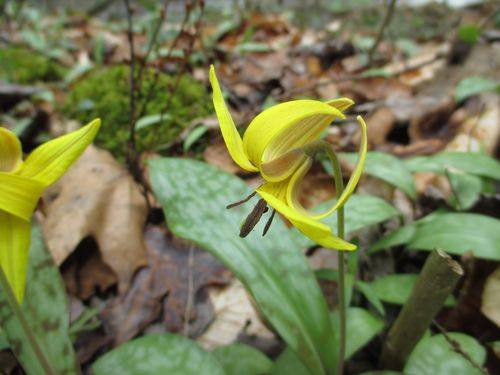 I recorded an open flower for this plant on April 5th, and got this photo three days later, April 8, 2015.  [Photo: Cathie Bird] 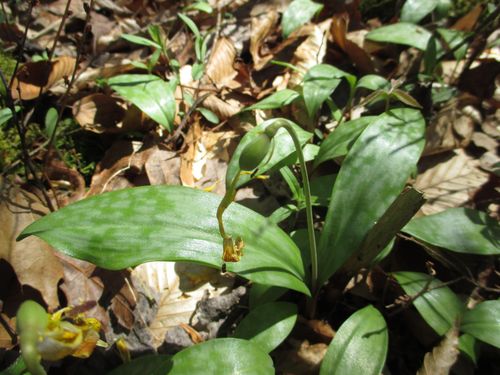 In this photo, the flower is gone and the fruiting process is underway, April 11, 2015  [Photo: Cathie Bird] 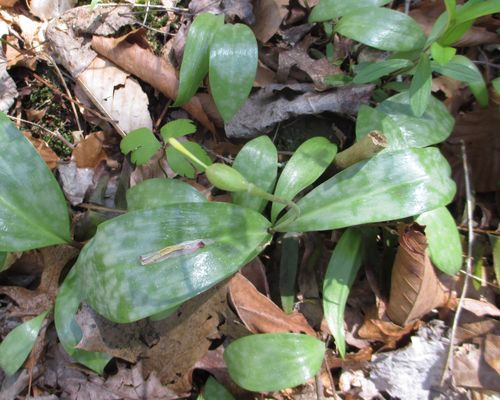 Fruiting progress, April 17, 2015. At this point I'm curious to see what comes next. I have often seen early fruit stages for this species, but, at least with DTV1, fruits in past years have disappeared. Based on appearance of the stems, I guessed they had been broken off or eaten by something.  [Photo: Cathie Bird] 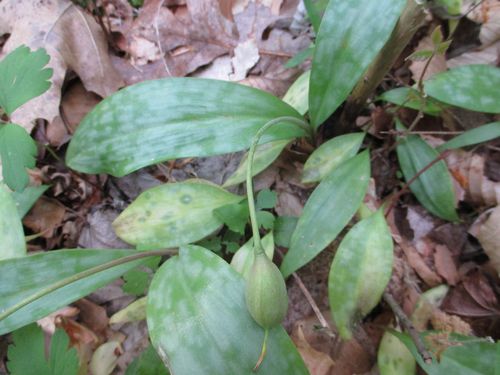 By April 22nd, the fruit is starting to show a shift in color and I'm now officially in a learning zone. The color didn't change much more for 2-3 weeks. After I saw it on May 16th and noticed it was definitely more yellowish-tan, I did an online search for images or info on ripe trout lily fruits. I found the information I needed at Nature's Notebook. I recorded a "ripe fruit" observation at Nature's Notebook on the 18th of May. This designation was premature: I had misread the description that defined "ripe" as a fruit that has split open exposing the seeds. Next year I'll be able to be more accurate. Not long after the 18th, the leaves dried up leaving just a stem with the fruit. [Photo: Cathie Bird] 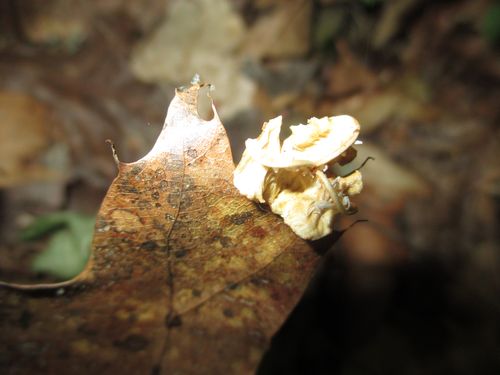 By May 22nd, the fruit was quite yellow and looked like it was drying out. I thought I saw a very tiny split starting to happen. By the next day it looked like it had exploded. When I lifted it to get a better look, I saw two or three little round white seeds. All but one dropped out with this movement. With much difficulty due mainly to poor lighting conditions under a now full canopy of leaves above, I finally got this photo a couple of days later, May 25th, using a leaf to hold the spent capsule up toward the lens and the light.  [Photo: Cathie Bird]

Today there is just a dried out capsule near the marker. The stem that held it is almost invisible. DTV1 and its colony members are done with surface work. Now the underground work of expanding the colony proceeds beyond my view.

Check out this drawing of Erythronium americanum from an 1808 botanical publication.