After I saw the rare and local Golden-banded Skipper on May 6th, I wondered what I could see here in the holler that could be anymore exciting. This week I found out that the joy of rarity can be topped by multiple unusualnesses.

I took this photo of Eastern Tiger Swallowtails this morning, and assumed (from a distance) that the black ones were dark phase females of that species. However, I had seen butterflies earlier in the week that I thought were either Pipevine or Spicebush swallowtails. When I took some time to study this picture today, I realized the dark ones were Papilio troilus, the Spicebush species: 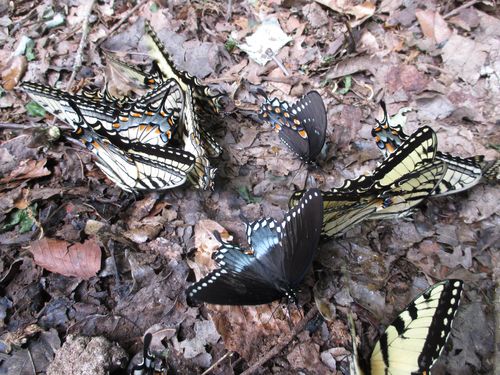 Out in the yard this week, a large butterfly circled my head a couple of times. My first thought was "Monarch" even though I have never seen one here. A day or two later I thought I saw one feeding with some other butterflies, but I didn't have my glasses or a camera to catch a good image. I checked out my butterfly guide to narrow down the possibilities so that, if I saw it again, I could look for details that would help me identify it. The two possibilities seemed to be a Monarch or Viceroy. Just by its size, I suspected it was a Viceroy.

Today I solved the mystery when this cooperative Viceroy let me get close enough for a bunch of pictures: 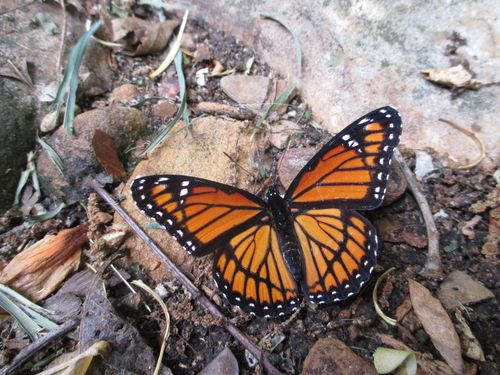 Monarchs and Viceroys are in different families. Viceroys share a lineage with Red-spotted Purple butterflies that showed up about 10 days before I saw the Viceroy.

I also had an an unusual encounter with a Luna moth this morning. Most often I see them outside around my porch light. On occasion a Luna moth has followed my dogs in through the pet door. I spotted this one clinging to the underside of some poison ivy: 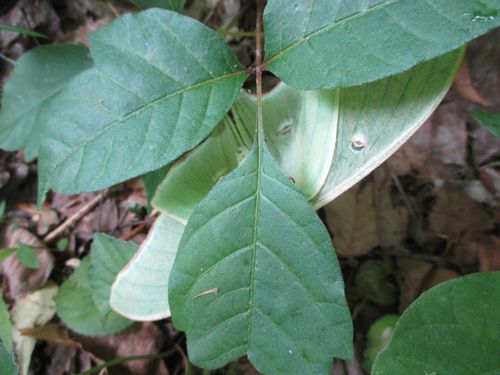 To determine whether it was dead or alive, I carefully lifted the leaves with my walking stick; it remained motionless, but I'm pretty sure it was alive: 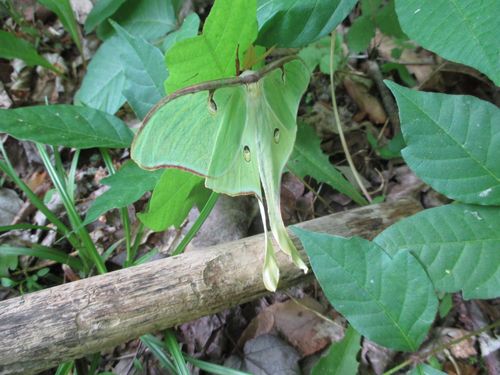 The other moth I identified this week is the Mournful Thyris. The first image I got of it has a carpenter bee and two unidentified green worms/caterpillars: 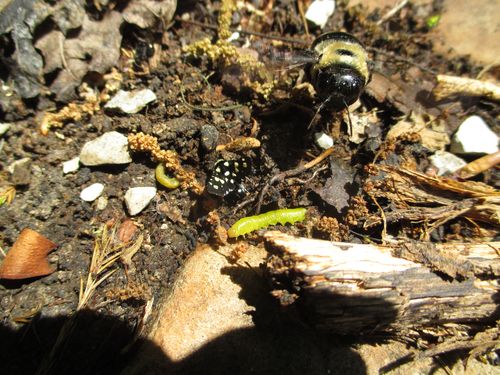 Here's a second photo that zeros in on the moth: 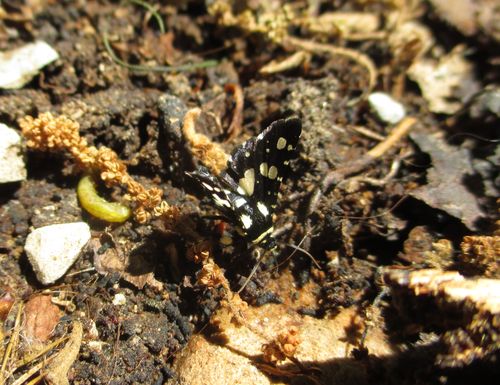 Now for something totally different, here's the little Red Eft -- the land-dwelling juvenile form of the Eastern Newt (Notophthalmus viridescens) -- that I found this morning, probably on its way to the creek: 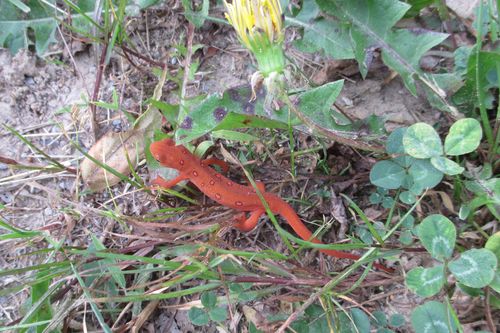 It's been a great week for birding in the holler, too, but I'll save story that for another post.

Posted by Cathie Bird on 16 May 2015 at 02:57 PM in Amphibians, Butterflies and Moths, Cumberland Mountains, Fish and Wildlife, Phenology, Tennessee | Permalink