« One Season in the Life of a Trout Lily | Main | Strong effects of climate change on common bird populations in both Europe and the USA | EurekAlert! Science News »

Who Sings What in the Holler

Last spring as the holler filled back up with bird calls, I decided to make an extra effort to identify more of my winged neighbors by sound. Once leaf out gets underway, it becomes increasingly difficult to spot birds around here, especially the smaller ones. This project had a slow start as I tried to figure out the best way to start matching up vocalizations to the scores of species that breed here, live here year round, or just pass through.

Fortunately actual sound recordings are easily accessible on the Internet. I was online using Cornell's Lab of Ornithology's All About Birds site almost daily last summer.

There was one song in particular whose maker had eluded me for at least 3 years. I was determined this was the year I was going to figure it out. Whoever it was came in large numbers (compared to other species), arrived fairly early in the spring and stayed all summer. I heard the songs most often at the forest edge along the flood plain of Hudson Branch, a headwater stream that flows through the holler.

I guessed it might be a warbler, so started there. I reviewed all warbler species likely to breed in this area and then started through typical calls one by one at the Cornell site. In the meantime, I kept an eye out for any bird movement during my holler walks. If I heard any call I didn't recognize, I tried extra hard to locate the singer. 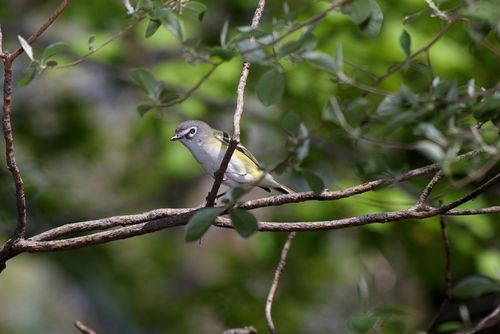 My first success was not with my mystery bird, nor even a warbler. One day I happened to see a small bird with a slate blue head, white eye ring and wing bars, with white and yellowish feathers on its undersides. While I still had it in view, it started to sing. Yay! I raced home, found a likely candidate in my go-to bird guide (an updated 1983 version of this one) and went online to check the song out. I confirmed it was a blue-headed vireo: a first for me and a new addition for my holler bird list.

I think the next bird-to-sound match I made was that of a Kentucky Warbler. Again I lucked out and saw one very low to the ground on a small bush just before it started to sing.

Interestingly, one of the species that came to mind to rule out was the Hooded Warbler. A few weeks later I finally identified this species as my mystery bird. I had been mimicking its song mentally for several years, but recognition among the many recordings I heard just never clicked. One day, after spending some extra time listening to all the varieties of it being sung in the holler, I made an audio match at All About Birds. To date, I have only seen a female for sure and had brief sightings of what I thought were males. Still, it was exciting to be 99% sure of an ID by song, and I added Hooded Warblers to my observation list at Nature's Notebook. Another warbler I had seen but not heard for sure was the Yellow-throated Warbler. For a couple of years, a pair has been nesting in the woods close to my house. I often see the male(s) hunting for insects around my porch and driveway. One year I saw the parents and some fledglings. Last summer I was able to connect this bird with its song.

While I sit here waiting for spring and all the new sounds it brings to the holler, I have been getting to know the White-throated Sparrows a little better. I usually see them in groups in the thicker brush along Hudson Branch which made them hard to identify at first. On several cold and snowy days this winter I've seen them picking around the patches of dried out Leafy Elephant's Foot (Elephantopus carolinianus) just outside my study window. Their distinctive markings, including the yellow lores on a couple of the males, were very clear at closer range. Here's the best photo I've gotten so far -- a little grainy because I took it through a grubby window on a gray day, but satisfying to get even this view when much of the holler is still sleeping, waiting for the eruption of life that is now only weeks away.

Male White-throated Sparrow on February 9, 2016. Other searchers around the Elephantopus this year have been Tufted Titmice, Cardinals and American Goldfinches. [Photo credit: Cathie Bird]