Mayflies in the holler

My walks through the holler have multiple aims -- to see what's out there, to walk with my dog and visit with my neighbor, and to check on numerous plant and animal species that I observe for Nature's Notebook. Almost everyday, though, I see or hear or smell at least one thing I didn't expect. On Mother's Day this year, it was this mayfly, a species I had never seen before: 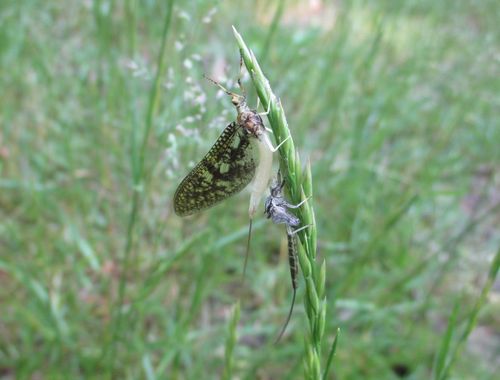 I had no clue about what species this was or what the silvery-looking thing was just below it on the stem of grass. I submitted an ID request at BugGuide right away, and got a fairly quick response, from someone who knows mayflies, that he believed this to be a female imago (adult form) of Ephemera guttulata, commonly known as a Green Drake. I did further research based on this identification and happened to find a Wikipedia page that pictured the "exuvia" of Ephemera danica, a mayfly also known, in some parts of the British Isles, as a Green Drake: 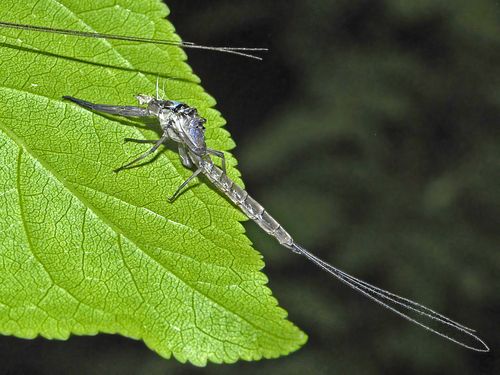 This solved the mystery of the other mayfly-looking-thing in the photo I took. I felt very fortunate to have found both the adult and its exoskeletal remains! I'm guessing it hadn't been out long and let me get several photos while it adjusted to its emergence. Later in the day, both imago and exuvia were gone.

If my Grandpa -- a great fly fisherman -- was still around, I'm sure he could have told me a lot about Green Drakes and other mayflies. When I did a search for Green Drakes, a lot of fishing websites popped up.

In 2014, I found this mayfly, which I'm guessing is some form of Hexegenia limbata, near the door of the Pioneer post Office: 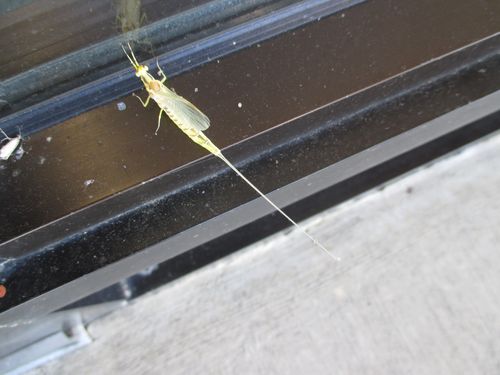 I believe this is one of the genus Leptophlebia. I came across this one on a fallen sycamore tree during a holler walk in 2012: 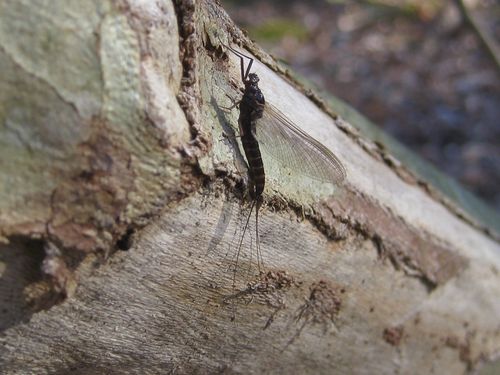 This was the first mayfly I was able to observe and photograph here in the holler. I think it's likely another of the genus, Leptophlebia: 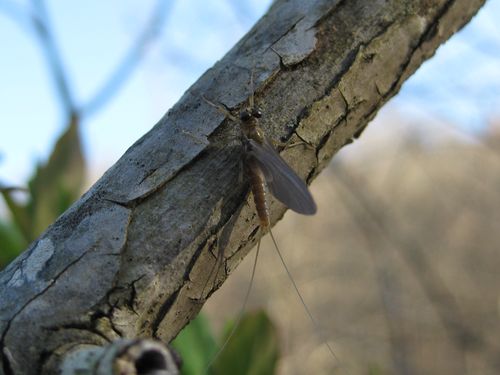 Mayfly communities have been of interest to me since I found out they were vulnerable to drastic surface mining operations such as mountaintop removal mining. Before I ever saw one here in the holler I had read some of the research and often mentioned them when I testified at public hearings to oppose destruction of headwater streams by coal mining.

Last year the Office of Surface Mining released a draft of its new Stream Protection Rule. When finalized, some of its provisions may protect mayflies and other species from further damage. However, the coal industry is trying to delay a final version of the rule until President Obama leaves office, hoping they will have a shot at killing stronger protections for Appalachian headwaters. Appalachian Voices has issued an action alert through which citizens can tell OSM that we need a final rule now.

Also, some of the research on mayflies and surface mining is available online if you're interested. For example:

Posted by Cathie Bird on 12 May 2016 at 06:12 PM in Citizen Science, Cumberland Mountains, Fish and Wildlife, Insects, Phenology, Tennessee | Permalink