« Songs and flowers in the holler this week: hooded warbler, stonecrop, wood anemone and more violets | Main | Out in the holler: Wood Thrush, Hummingbird and lots of leaves to hide them »

While I work up a post on what I saw in the holler this week, I want to acknowledge that today is Earth Day, and that, across the United States and around the world, thousands of people have shown up to March for Science.

I had planned my own march down the holler to celebrate, combining my (almost) daily holler walk to observe phenophases with contemplation of my role as a citizen scientist. But heavy rain -- 3.5 inches as of 11:30 am -- has so far put a damper on that. I opted to sit on the porch for awhile and listen for birds.

The only ones out in the downpour, however, were an eastern phoebe and a hooded warbler. So, I turned my inner witness toward my own thoughts, reflecting on my life-long connections to nature and (eventually) to formal study of nature through science. 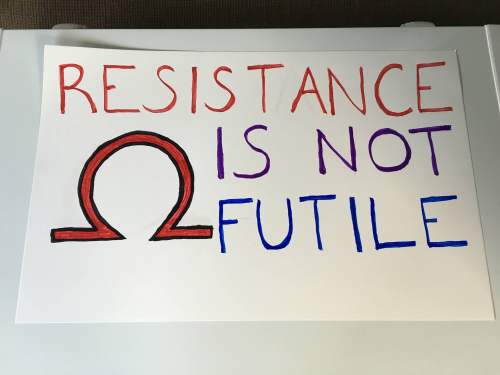 One of my favorite #MarchForScience signs. Photo from a Facebook friend.

The theme that arose today centered on my experience of ways we can know the world. Science as we commonly, humanly understand it is certainly one of those. I find it enjoyable to explore, observe, and question nature with citizen scientist eyes.

Over time, I've discovered other ways of knowing. I've learned not so much to privilege one way over another as to flow between and across them, to integrate the experiences, to welcome awareness of multiple meanings and possiblities.

It's wondrous to me how, on so many holler walks, my citizen-scientist-self -- focused as it is on phenological details of another life -- allows my citizen-philosopher (or some other self) to surface, revealing something new, deepening my relationship with that other being and with the holler as our common home.

Here are some of the articles I've enjoyed reading this week on the #MarchForScience:

How the March for Science Misunderstands Politics (Andrew Jewett in The Atlantic, April 21, 2017)

The March For Science May Be Flawed, But It's More Than Worthy Of Your Support (Kavin Senapathy - Forbes, April 14, 2017)