« American Trees Are Moving West, and No One Knows Why -- The Atlantic | Main | Seeing forests, seeing trees »

Out in the holler: goldfinches, white wood aster, heath aster

American goldfinches returned to this end of the holler as soon as the Echinacea patch fruits ripened, and I finally got a decent photo of the female. She and two males harvested the seeds for about a month before returning -- most likely -- to the huge fields beyond my observation plot. I still see them or their relations when I drive out to town. My last sighting of goldfinches up here was on September 24th when I saw one of the males feeding on yellow crownbeard, just around the corner from the Echinacea patch.

This year I added a couple of asters to my observation list: white wood asters and white heath asters. I delayed reporting observations on these species until they had flowers, even though I'd been watching areas where I'd seen them growing. I'm more familiar with the flower phenophases of most forbs -- once the flowers are present, I start anchoring images of their leaves into memory so I can catch their initial growth the following season. Next year, of course, I'll have the marker flags to help me out.

Wood asters -- lots of them -- populate the moist woods behind my house. If I have not already sensed a shift into fall energy, the flowering of Eurybia divaricata gives me a shove. I identified these plants very soon after my move to the holler seventeen years ago. 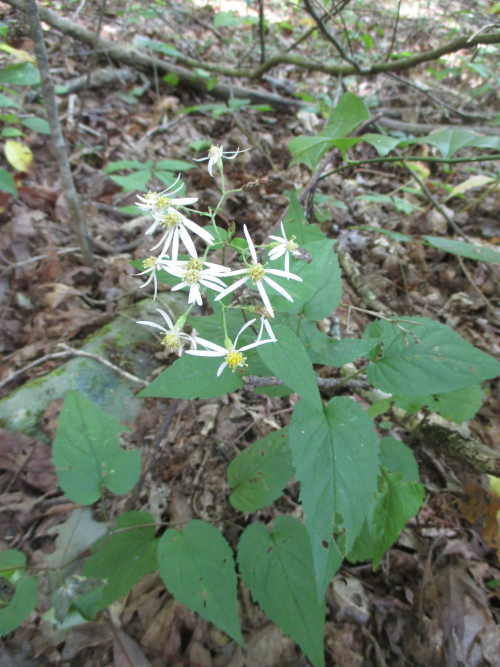 White heath asters, on the other hand, have only recently begun to grow around my house. I think this is only the second or third year I've noticed them. They have integrated the Echinacea patch that grows on ground disturbed by construction of an addition to the house in the late 1990s. I'm wondering if they were seeded by birds that visit the Echinacea, or maybe by my dog, who brings all kinds of seeds into the yard and house in his fur! 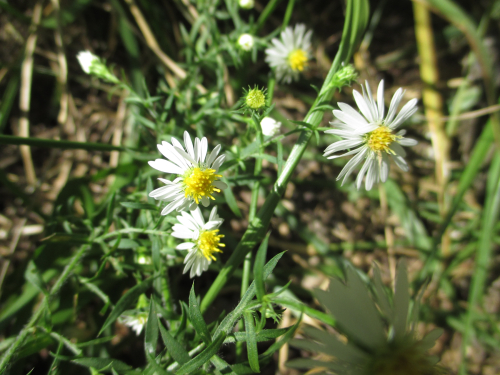 The first heath asters I observed in the area grew further down the holler along the lane that goes through my neighbors' field. Over the years I noticed them spreading up the Hudson Branch drainage toward my place. Identification of these plants as Symphyotrichum ericoides is still in the realm of "my best guess", however. Plants commonly called "white heath aster" come up under several genus/species designations in plant guides and online sources, and differentiation has not always been clear to me. I'll keep following this but, for now, I'm going with this ID.

So, now that the asters are flowering, I'm reflecting on observations of holler phenophases over the spring and summer of 2017. Last year, an early spring followed by late summer/early fall drought and wildfires shaped what I saw in the holler and in my neighborhood. An early spring came again in 2017, but spring and summer were noticeably wetter, and generally cooler. Add to this the ongoing maturation of plant and animal communities that have been relatively free of significant disturbance for several years. In my next post, I'll share some thoughts about all of this.