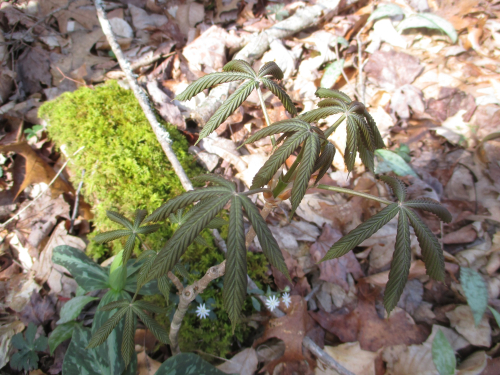 For a couple of months, I've been planning a post on longer term changes I've noticed with plant and animal neighbors here in the holler. I've lived here 18 years, now, tracking these lives as well as my own in relation to theirs. I recently discovered that I've reached a new milestone of sorts: 10 years ago, I began formal submission of data on life phases of several species across the seasons for Nature's Notebook, a project of the USA-National Phenology Network.

This year, USA-NPN and Nature's Notebook celebrate a decade of data collection by citizen observers with new logos, and a special web page that will feature a different aspect of the network's 10-year history every month.

At the time I signed up, I didn't register that Nature's Notebook was a new project. So, I was somewhat surprised to learn last week that I'm one of three observers who have contributed data in all 10 of those years.

Two major questions pervaded my reflections on last season’s holler observations: where did all the bees and butterflies go, and, how does the interplay of natural succession, climate change, and shifts in land management practices impact what I'm seeing (and thus reporting) in my observation area?

Thoughts about the history of human occupation at the geographic coordinates of the holler start to roll. The picture gets complex very fast, taking me into possibilities too numerous to manage in easily accessible mental spaces. I come back to the simple act of recording what's up with Buckeye-1 or the Great Spangled Fritillaries at that moment, on that day, in this holler in east Tennessee, knowing that others in the phenology network are recording observations for their species, where they live. Such ins and outs of thought, of awareness, have been a regular feature of my "phenology practice". It occurs to me as I write this post that this microcosmic process reflects a macrocosmic one: the expansion and contraction of subtle energy fields as a fundamental pattern of the cosmos, and noticeably at play in my practice of Qigong (a "Quantum physics technology").

I grew up in the grip of scientific materialism. My undergraduate training as a naturalist in the late sixties/early seventies was rooted there as well, though I can look back and see shifts toward thinking about the world in terms of whole, integrated systems rather than a collection of independent, disconnected parts. This shift even led me to change career goals and pursue a graduate degree in contemplative psychotherapy, as well as certification as a psychoanalytic psychotherapist.

For many years I felt a kind of tension growing -- between seeing forests and seeing trees -- often feeling that I was, at heart, more of a forest person. The feeling of energetic oppositions came alive especially when I remembered the tree person of my childhood exploring the life and landscapes of the Flint Hills and the Rocky Mountains.

I see myself now with at least a toe-hold in an integral world view, appreciating multiple points of view, and enjoying the heck out of migrations between wild, non-local exploration of mind and spirit, and the feet-on-the-ground-dodging-poison-ivy collection of phenology observations. I look forward to another 10 years of it!

Just to finish this, in a bit of synchronicity, these articles popped into my viewshed as I was writing this post:

Questions, more than answers, are the pathway to collective wisdom (Daniel Christian Wahl, 1/16/18)

Beyond Biodiversity: A New Way of Looking at How Species Interconnect (Jim Robbins, 10/12/17)

Give one species the task to come up with a theory that spans them all: what good can come out of that? (Hanna Kokko, 11/29/17)

What’s Causing the Sharp Decline in Insects, and Why It Matters (Christian Schwägerl, 7/6/16)