« Mourning Cloak, Toothwort, Spring Beauty and Rue Anemone are out this week! | Main | Caught in the act: Buckeye Bud Burst »

Toothwort flowers, yellow trout lily leaves, and other early risers in the holler 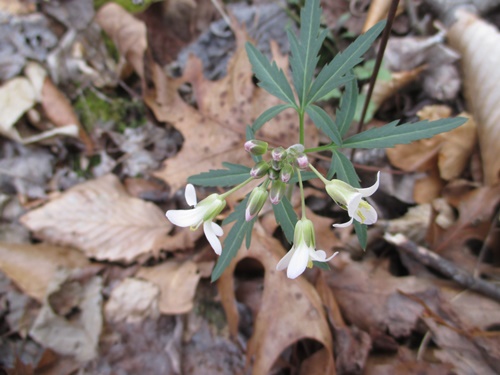 Early risers such as this cutleaf toothwort (Dentaria lacinata) continue progress through their phenophases, despite freezing night temperatures. Flower buds on this plant opened around March 17, 2018 [Cathie Bird photo]

After my last post, I decided to track daily weather highs and lows more closely for awhile, and notice how different plants fared. So far, the coldest temperatures of any 24-hour cycle have not lasted long -- for the most part, just 2-3 hours of freezing air before it starts getting warmer again. The lows themselves have not been more than 6-7 degrees below 32ºF. I'm speculating that this situation is consistent with weather history of the holler.

I hadn't done such close surveillance before and had not thought much about resilience of wild plants to what seemed pretty darned cold for little lives out in the woods. Thinking more about it this week, in light of considerations for how long earth, air and water stay warm during a day and how long they have to cool down before a reversal, it made more sense to me why most wild things seem to do pretty well even though this human worries about them! 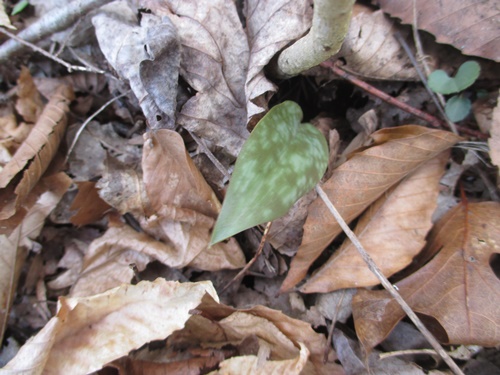 I have seen frost on my car during this period but not on the ground or plants. So far. Most wild plants I observe seem to do okay with one session of frost, but not with several in a row. One of the species that has not shown signs of a spring breakout is the apple tree down the lane. When earlier-than-usual warming periods began happening a few years ago, this tree responded with disastrous results. What I notice now is that it doesn't start budding or leafing out during the first warm days, even though other plants do. The quince bushes also seem to have adapted in this way, although they put out what I call "test buds" early, then more as the warm periods stretch out. Speculating again: the apple and quince are making adjustments to a warming climate. Echinacea leaves are up, March 6, 2018. This particular group grows in front of a large rock that probably serves as a bed warmer of sorts. [Cathie Bird photo]

I'm seeing leaves of several violet species throughout the holler. The haldberdleaf yellow violet (below) grows in the woodland edges close to my house. I don't observe this species for Nature's Notebook, but they are one of my favorite early spring flowers. 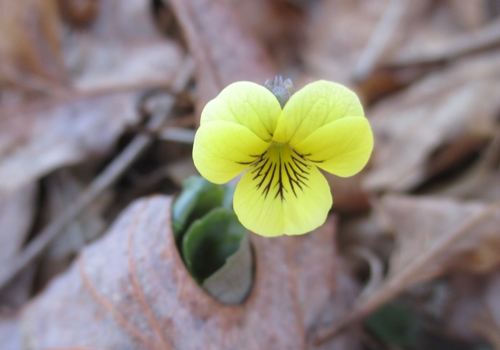 The day I checked on yellow violet progress, I also scanned the area for yellow trillium and leaf bud activity on a nearby Mapleleaf Viburnam. No action here yet, but, on my way back from town on Saturday (the 17th), I spotted a yellow trillium in the lower regions of Terry Creek. I look forward to emergence of the four trillium species that grow in the holler neighborhood. 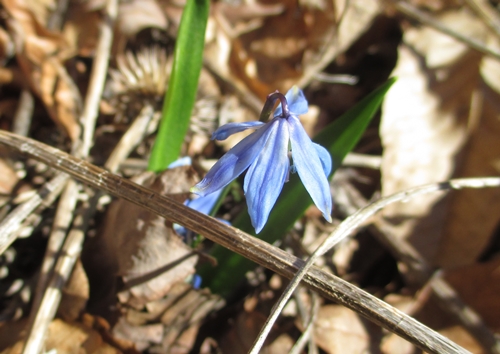 Activity in rock garden and planter areas includes narcissus, daffodils, phlox and bee balm. Orange daylily and iris leaves are much bigger than they were at the time of my February 27th post. A few dandelions are up, and grass on the lane and around the house will need to be mowed soon.

This morning as I wrote this post, a pair of eastern phoebes flew around an old nesting site on the porchlight above the planters. I'll check later today for placement of new nesting material. They have plenty of bugs to keep them energized for now!