« Trillium, hepatica, wood anemone and other shifting phenophases this week | Main | The bird is the word in the holler this week »

I watched Today Show coverage of the very first Earth Day in 1970 from a motel room in Denver, Colorado. I remember it well. I had just graduated from Michigan State, just gotten married, and wasn't sure what I'd be doing next. The room served as temporary housing for us while we waited to hear what my husband's next field assignment with the Federal Highway Administration would be.

I had spent the previous few years studying environmental interpretation, hoping to work as a naturalist, or maybe write about nature and the ecological systems of planet Earth. It blew my mind to see so many people celebrating that day -- in retrospect, the demands of completing undergraduate education had drawn my attention into a much smaller geographic area than the world I studied.

Now, 48 years later, as I enter the final decade or two of my life on the planet, I celebrate this Earth Day writing a post at HollerPhenology. 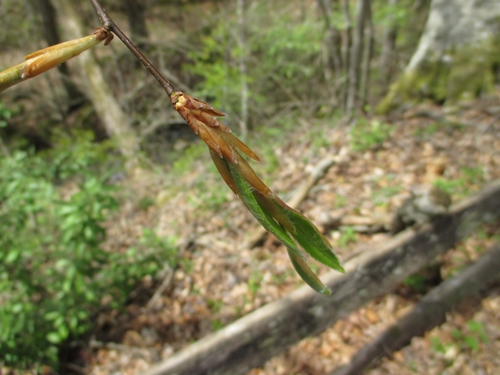 I thought Beech-1 would leaf out sooner than it did. It was not until yesterday morning that I saw a few buds that looked like the image above. Today, more buds are breaking, and many others already have little leaves hanging down: This particular beech is a very mature one. You can see its huge trunk behind the leaves in the image above. As I recall, this tree produced nuts last year, so it will be just the leaves I'm watching for phenophase shifts this season. 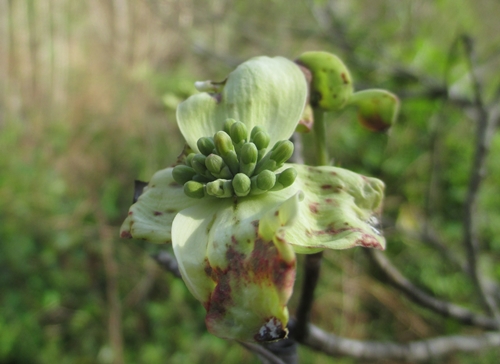 A few days after my last post, Dogwood-3 (above) started its flowering cycle. Today it has quite a few buds as well as some leaves starting to emerge.

I can't get real close to white oak-1's buds, however, a view through binoculars and a telescoping camera lens both show what looks like buds breaking: 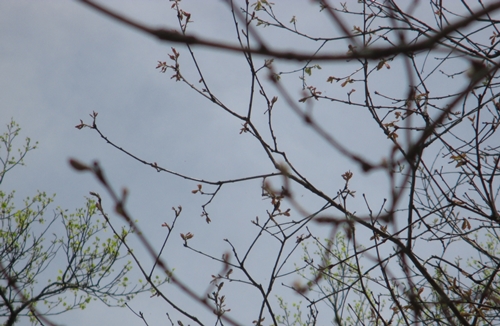 I have never seen flowers or nuts on this tree, but it's surrounded by other oaks that bomb my roof and driveway with acorns every fall. Then, it's kind of like trying to walk on ball-bearings out there. This year I have a bunch of baby oaks sprouting in my planters (thanks to squirrels and their kin), and around the yard: 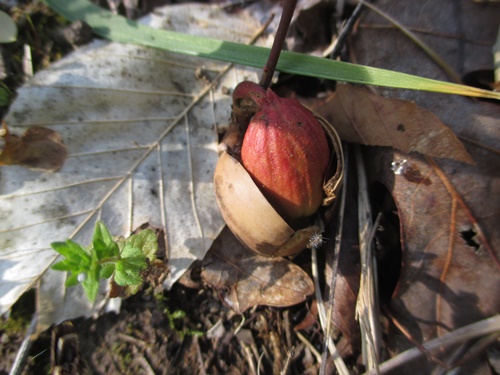 Looking out across the holler's landscape and beyond this week, I can see that the pale spring greens, reds, golds and purples create more of a continuous coloration of hillsides. 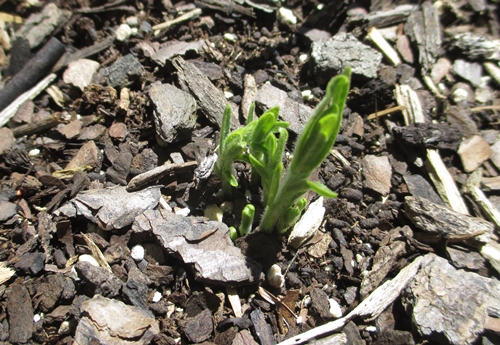 On April 20th, in the planters, I spotted this butterfly milkweed (photo above) coming out.

A few fleabanes have planted themselves in my planters as well. I usually let them do their thing, since they will have finished flowering before I need to plant anything else in their spot. Their flower colors range from white to pink to purple, adding some nice color in the yard before I dare plant the more cold-sensitive garden species. The fleabane below is over in the Echinacea patch, so it's in a safe zone: 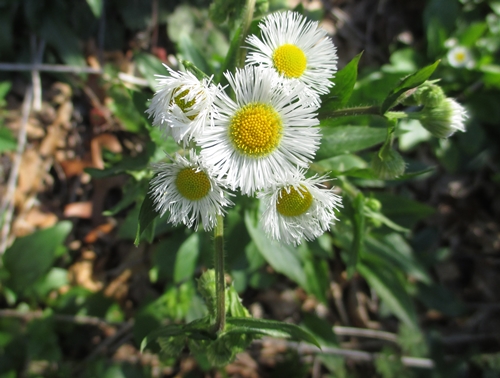 I think this is probably a common fleabane (Erigeron philadelphicus), but I'm still in the process of learning to differentiate the fleabane species that grow here. I had been calling flowers like this daisy fleabanes, but I think it has too many of the white rays to be Erigeron anuus. Now I need to take a closer look at the leaf structures to figure this out. 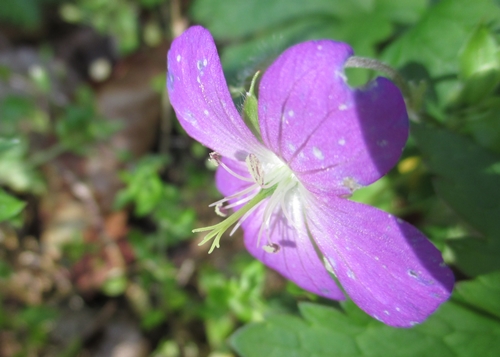 Wild geraniums are flowering up and down the holler. I look forward to these every year. I took the image above from a slightly different angle than usual, giving a bit of a profile to the pistil and stamens rather than viewing them head on. Bees and butterflies seem to like this species, too. Near my house there is a large area with lots of dwarf cinquefoil (above) this week. And just to compare the difference, here's an Indian strawberry growing a couple of feet away from the cinquefoil: 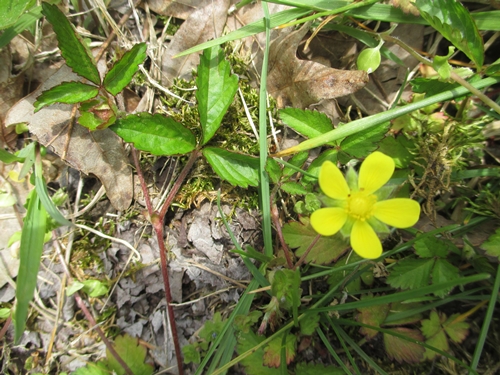 Earlier in the week I found violet wood sorrel leaves near some of the other plants I observe. Here's a little colony of them: 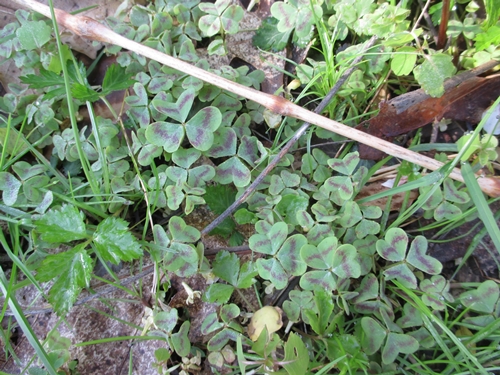 I finally got a photo this week of what I think is a "sweet betsy" trillium. It's on a steep hillside with tricky footing, otherwise I would have tried to get closer to see all of its parts better. According to my look-here-first guide for southern Appalachian wildflowers, the Sweet Betsy and Yellow trillium form 'hybrid swarms' in Tennessee. Sweet Betsy is more prevalent until you get to the west flank of the Smoky Mountains, the authors say, where it's replaced by yellow trillium. 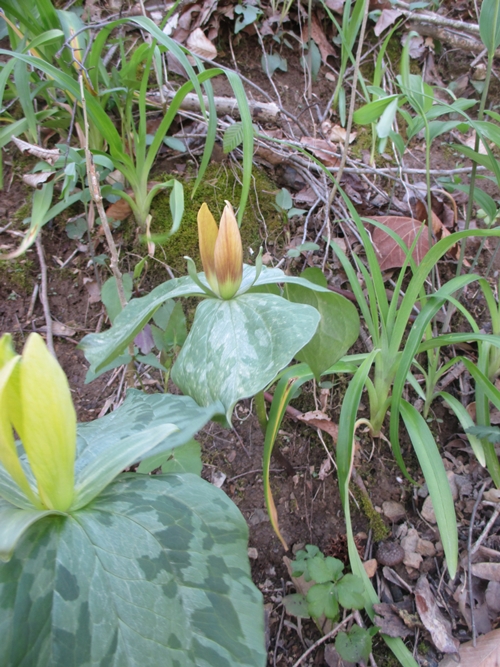 Just a few notes on birds before I finish up: I saw a male hooded warbler and great blue heron in the holler this week. I had been hearing the hooded warbler for a couple of days, and it sounds likely that I'll have a nesting pair of them near the house again this season. Other bird voices common in the holler this week were titmice, white-eyed vireos and blue-headed vireos.

I bent down to pull some vegetation away from the edge of my planters a couple of days ago and found this skink sunning itself. I think this one is a broad-headed skink, not the eastern five-lined species I observe for Nature's Notebook: 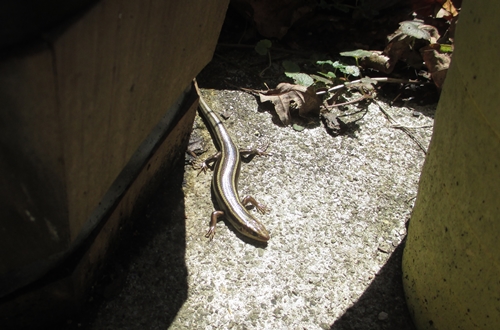 All in all, a great Earth Day week out in Frog Pond Hollow.