Wren family returns, a new nest is built, and I see my first fledgling wood thrush

One month to the day after four Carolina wren nestlings fledged, the young birds and their parents returned to my planter garden in late afternoon to forage, preen, scratch, stretch and take dust baths in the soft dirt under my porch. Here's some of the video I got:

Such a wonderful way to end the day for me, to reconnect with these birds as a family. I have had this experience before with phoebes and wrens that hatched, flew out into the world from nests near my porch (at least I suspected it was the same ones), then returned as a group to hang out in the planters for awhile. This most recent wren reunion, however, was the longest and most animated one yet.

I noticed during their visit that one of the parents (the mom, I think) got into the hanging flower baskets. I couldn't see what she was doing, but whatever it was set the stems, flowers, and even the basket in motion. Over the next few days, the parents continued to bring nesting material into the basket with red flowers. On the day I took the video below (June 10th), they worked most of the day at this:

On June 11th, I didn't see any nest building or even visits to the basket. For the next few days, however, the male came each morning, sat on the porch rail near the nest, and sang.  In the meantime, I spent much time thinking about how to maintain the planters, and especially the baskets, if they decided to have another brood here, keeping in mind how my activity might affect them. By June 15th, I decided I had to water the planter flowers and at least carefully check the baskets. They are kind of tricky: being partially under the porch roof, they don't catch much rain and require more frequent watering.

While checking the soil moisture in the red basket, I also looked closely to see the orientation of the nest. It looked like I could use my smaller, long-spouted watering can to put enough water on just one side of the plant to deliver sufficient water to the roots without disturbing the nest. In the middle of this procedure, I saw a flash of wren just beyond the planter, and watched it fly down to a place where grass and driveway meet. I suspect that was the mom flying out of the nest, which I now believe to be occupied. I'll limit my business on the porch and around the planters for awhile, and just watch from a distance. No doubt about this, though: the wren dad continues to be there under the nest every morning, and sings me into the new day. 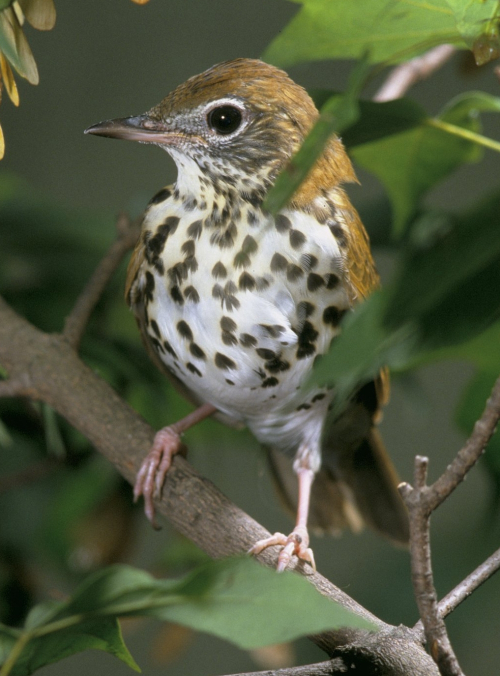 Farther down the holler this week, I saw more wood thrushes in just three days than I have in a whole lifetime.

In the first sighting on June 13th, two wood thrushes were entangled in what looked to be a territory dispute right in the middle of the road. I had to stop and watch or risk running over them. They were in such a flurry that I couldn't see for sure if they were both males, and first wondered if this was, instead, a mating ritual. After several seconds they broke it up and continued with a short bout of aggressive/defensive posturing at the side of the road. At that point I ruled out the mating interpretation.

Friday afternoon, on my way to pick up my CSA veggie basket at a neighbor's farm, I saw a single wood thrush just beyond my house, sitting in the same place that I'd seen a female two or three years earlier. Then yesterday, as I returned from a trip to town, I saw a bird standing in the middle of one track on my driveway. It didn't move when I got closer. I could see that it was a very young wood thrush, probably just fledged.

I stopped the car to give it time to move off. It didn't. A few seconds later, a female wood thrush flew down to the lane and hopped toward her fledgling. First she tried to coax it to the side of the lane. When that didn't work, she tried a couple of hops and then a short flight to a spot beyond the track.

The baby moved off a little, enough that I thought I could get past it safely. When I started moving the car forward, the young thrush took a leaping, low hop-flight into the creek-side vegetation while its mom watched from a tree branch. This whole thing happened in the same space I had seen the mom the day before. It was my first sighting of a wood thrush fledgling. I replayed the scene in my mind throughout the evening and great joy ensued!