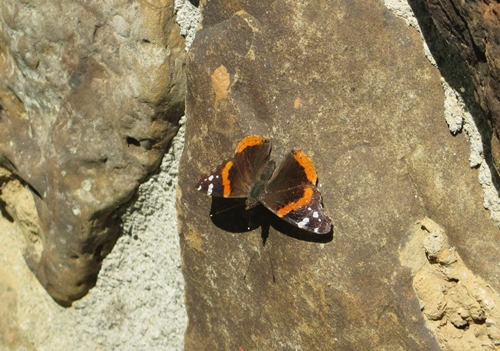 Out in the holler, trees are fully leafed out and most of the early spring flower species have pretty much finished their above-ground phases. Among the plants I observe for Nature's Notebook, I've turned my focus to Echinacea, jewelweed, wingstem, and hopes of catching initial growth phases of later summer species like the frost and wood asters.

Activity of winged creatures -- birds, butterflies, dragonflies, bees -- brings new amazements daily. After zero sightings of red admirals last year, I saw one (images above and below) the first week of June. 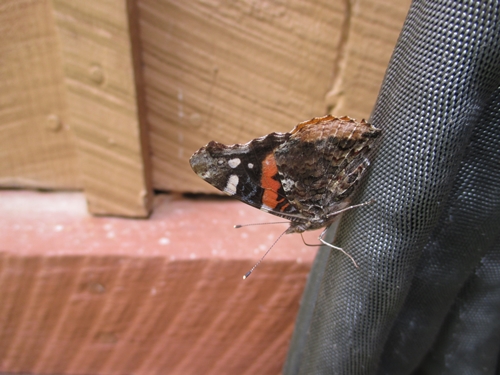 There are many butterfly species that I see infequently, for example, the hackberry emperor. Until last week, I had not seen another one since my memorable introduction to this species in June 2010, when one landed on my window sill and walked around for several minutes while I got plenty of great close-ups: 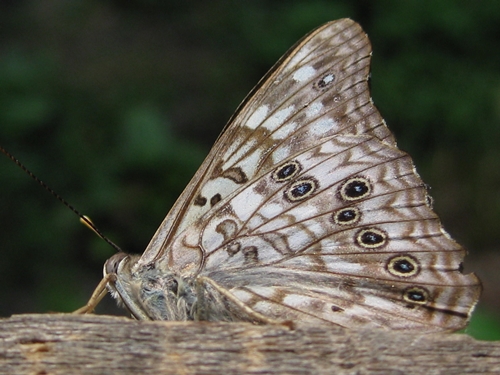 The one I saw last week stayed for a long time on a pile of garden soil, but I was not able to get closer than a long lean out of my study window with my video camera for this photo: 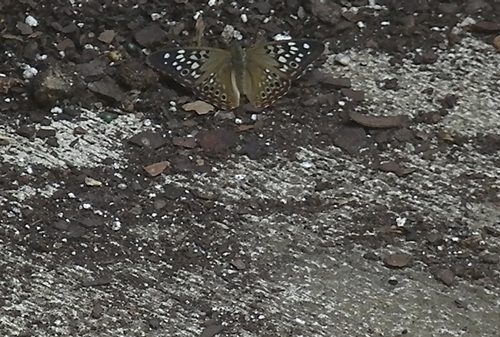 I could have rested in butterfly bliss with the return of the admiral and hackberry alone. Then along came an Appalachian brown, my first ever. Again, I managed to get a few distant images from my window.  When I went outside to do some planter maintenance a little later, I saw it just a few inches from me. Not only did it stay put while I ran back inside to get my camera, it let me get right up in its face, so to speak, for 15 to 20 shots from different angles: 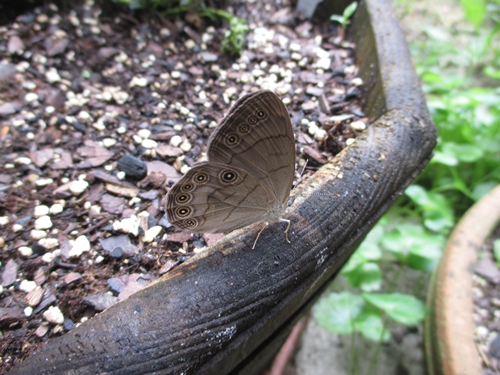 Just to make sure it was an Appalachian and not a Smoky brown, I submitted an ID request at BugGuide. You can view the entry and confirmation at my BugGuide user account.

I saw my first ebony jewelwing of the year on May 29th -- too far away for a photo. They are one of the most strikingly beautiful winged creatures that live in the holler.

I'm still seeing toads around. I almost dropped a new tarp for my brush mower in this one's head. If it was sitting there when I approached the car, it's a wonder I didn't step on it: 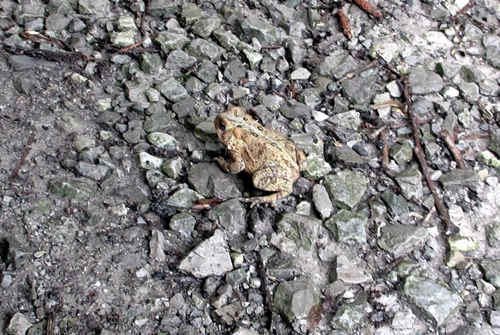 This toad sighting was of interest because I'm pretty sure now that I'm seeing at least two different toads. American toads' skin can be brown, red, olive or gray. To complicate identification, air temperature, humidity and stress can cause color shifts. Fowler's toads come in shades of gray or brown to brick red.

I have taken this into account as I've collected and recorded toad sightings. It's also why I treasure any photos I can get to look for more reliable differentiations. The one above is lighter in color and slightly smaller, but had the space between the cranial crests and the parotoid glands.

I had a surprise encounter with a darker toad on June 5th when I went out to re-pot a new foxglove plant. I'm not sure if it was a Fowler's or American toad -- no photo to study later. I was happily shoveling dirt around the plant when the toad suddenly popped into view near my hand. I have no clue where it came from, unless it had been sitting within the dense leafage of the foxglove before I pulled the plant from its plastic nursery pot. 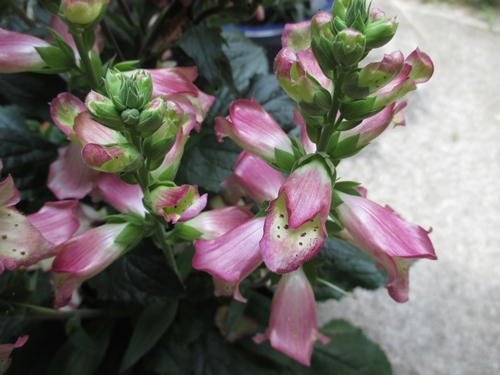 I'm still doing some upgrades around my planter garden. In addition to the foxglove, I found a butterfly milkweed at Stanley's Greenhouse -- my go-to nursery for annuals and perennials -- that already had buds atop very sturdy looking stems, and brought it home to the holler. I've tried to grow this species for the last few years, but I'm doing something they don't like, I think -- new plants have come up every spring, but they're skinny, budless, and only one or two have made it through to the fall. At this point, I'm guessing the problem is that the soil and planters I've put them in don't drain or dry out very well. Also, I am pretty deep in the woods here. Plants that need full sun occasionally require that I move the pots around as the sun shifts across the seasons. Or maybe I need to buy plants that are more mature to begin with. 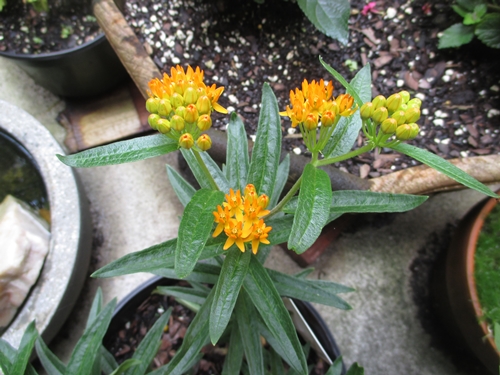 The first flowers opened on June 3rd. People are not kidding when they say these milkweeds are butterfly magnets. That's my next post.