« Wren family returns, a new nest is built, and I see my first fledgling wood thrush | Main | Recent butterfly and dragonfly sightings in the holler » 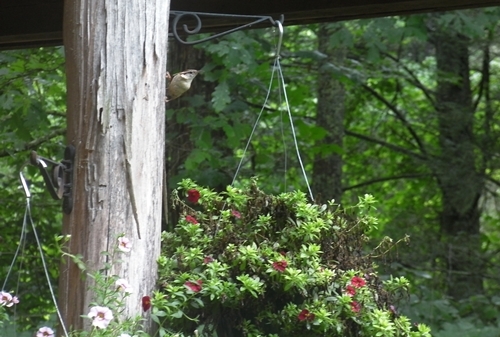 In my last post I wrote about new nest building activity by a pair of Carolina wrens that ended on June 10th. As of June 17th, when I accidentally flushed the female out of the nest, I have considered the nest to be occupied. Ten days later, June 27th, I saw the female leave the nest, and the following day, got a photo of her (above) as she arrived at the nest. Later that day, I saw the female bring food a couple of times.

Both parents have been bringing food since July 2nd. Here's some video:

While this was going on outside, I consulted Cornell Lab's Birds of North America database, and continued working through their online Bird Academy course, Think Like a Bird: Understanding Bird Behavior. I've found both of these to be extremely valuable resources as a second round of wrens-in-the-holler stories unfolds.

Based on info from Birds of North America, I guessed that the nestlings would fledge sometime on Friday, the 6th of July.

I noticed an increase in the number of flights to the nest by both parents on July 5th. During the trips later in the day, the approach behavior of the parents shifted, with the mom coming to the porch rail and hopping back and forth before going up into the nest.

Also on the 5th, I got this video of the dad catching a bug. He had just been to the nest, and was singing after his exit, when he saw a bug and went after it:

This is the last video of activity at the second nest for this wren couple. Instead of taking food directly to the nest upon arrival, the mom wren sat above or below the nest making soft vocalizations for several seconds before entering. In this video, you can hear the dad wren singing fairly close by:

I may have caught a brief glimpse of at least one fledgling, but I could not get my camera or binoculars quick enough to verify this before the bird dropped out of sight under the porch.

Today, except for vocalizations of a male wren at the edge of the woods near the nest, it is very quiet. I am assuming all surviving nestlings have fledged. I'll watch, now, for any return visits by this second round of wrens, and for whatever else may draw my gaze around and beyond my planter garden.