My long visit with a northern pearly-eye 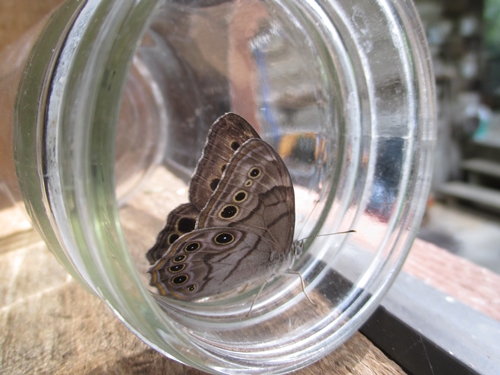 Northern pearly-eye (Lethe anthedon). This is the best image I could get of the top wing pattern. [Photo: Cathie Bird]

Late in the evening of August 19th, my border collie-mix, Shadow, came back into the house through the pet door. As sometimes happens, he also let a visitor into the house. At first I thought it was a large moth, but as I got closer looks, its profile suggested "butterfly". I chased it around the house, trying to catch it so I could put it outside, because my experience is that butterflies don't hold up as well as moths if they get stuck indoors. I gave up after it flew way out of my reach and looked as if it intended to stay there.

The following morning, it tried to find its own way out. I easily caught it in my bug jar as it fluttered against a glass door. Taking it back to an open window, I removed the lid and laid the jar on the window sill. Not before I got my camera ready, though.

At this point I guessed it was a Southern pearly-eye. I'd only seen one pearly-eye since I moved into the holler, and that was way down the road in the Terry Creek drainage. I hoped that good photos would help me identify genus and species for sure, since both northern and southern pearly-eyes live here. 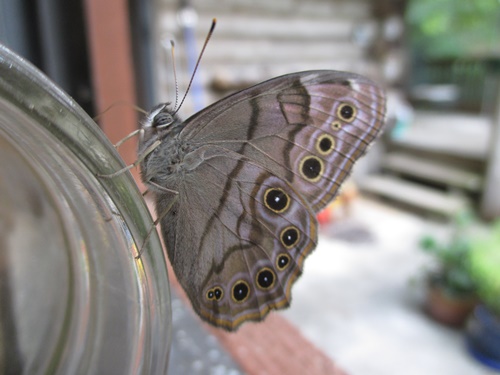 The butterfly took its time exiting the bug jar. I got more than 40 photos before he flew back into the holler. I decided to submit one of them to BugGuide for help with the ID, and the feedback from a reviewer there was "Lethe anthedon" (Northern pearly-eye).

Fortunately I had uploaded a photo of my first pearly-eye sighting long ago to Flickr, because I couldn't locate it in my photo archives: Before next spring I intend to hone my pearly-eye recognition skills, and to be more fluent in in taxonomic issues for the pearly-eyes, and "tree browns" such as Lethe appalachia that I included in a previous post. Here's an excerpt from an info page on this at BugGuide:

Explanation of Names
This is a large, primarily Asian and Indonesian genus, with few representatives in North America. There are two different looking groups of species in North America that have been treated as distinct genera or subgenera by various authors. These are treated as subgenera of Lethe in 'A Catalogue of the Butterflies of the United States and Canada', which is followed on BugGuide.
The often cited distinction of larvae of Old World Lethe species having only one head horn, as compared to two on American species is false. All have two horns, though their length varies from species to species and with the age of the caterpillar. The top of the head is produced forward, and horns on mature larvae are close together and often parallel. On many species they are very close together, or sometimes fused at the base, and could conceivably be mistaken as a single horn - if a person does not look closely.
The genus Lethe is the only American representative of the Old World subtribe Lethina.

I experienced some confusion on this because my go-to butterfly guide treats the pearly-eyes and browns as distinct genera (Enodia and Satyrodes) as opposed to subgenera -- for me, and perhaps other amateur naturalists, a common cause of hair-pulling.

Posted by Cathie Bird on 20 October 2018 at 04:11 PM in Butterflies and Moths, Citizen Science, Phenology | Permalink