« My long visit with a northern pearly-eye | Main | I guess it's spring now. »

Fall creeps into the holler Peak color for most of the trees in the holler happened around the 25th of October. With windy storm fronts moving through during the first week of November, many of the leaves came down. RedMaple2, for example, lost all remaining leaves --95% or more-- early on November 6th in a thunderstorm strong enough to wake me and my pets up at 3am.

As of today -- except for the Amur honeysuckle, forsythia, multiflora rose and the beech tree farther down the holler -- all the forbs, shrubs and trees I observe have lost 95% or more of their leaves.

The holler had a couple of light frosts that shriveled leaves up and down the lane. Out in my planters, however, the chives, lavender, foxglove, and a few of the bee balms still look good. Time for one final chive and lavender harvest, I think.

So, in terms of phenology observations and reporting, I'm pretty much down to noting phenophase shifts for 3-4 plants and watching for birds and animals that will be around the rest of this fall and winter. The quieter times in the holler gave me some space to think about what's happened since my last post, and to write a little about how things went for some of the plant species this season. 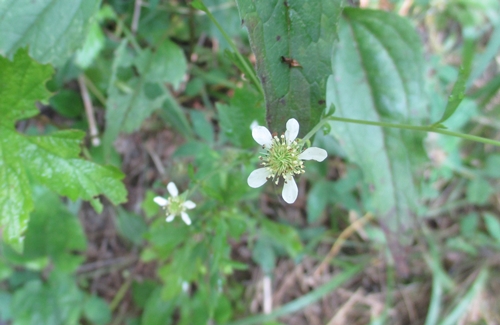 I noticed tons of white avens (image above) in more places around the holler than I'd seen since I moved here. The same was true for orange coneflowers and common St. Johnswort (images below). 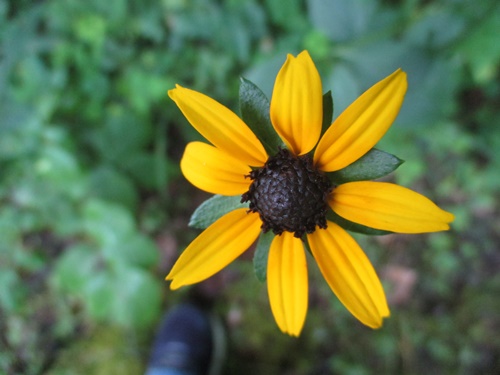 I hadn't seen much St. Johnswort the last 2-3 years. I'm still checking photos to decipher the species. On occasion I've observed Spotted St. Johnswort considered to be "rare" in terms of frequency in this part of Tennessee. If they come up in such perfusion next year, I need to get a better record of the tops and bottoms of the leaves, and clearer images of the flowers to help myself out on identification. 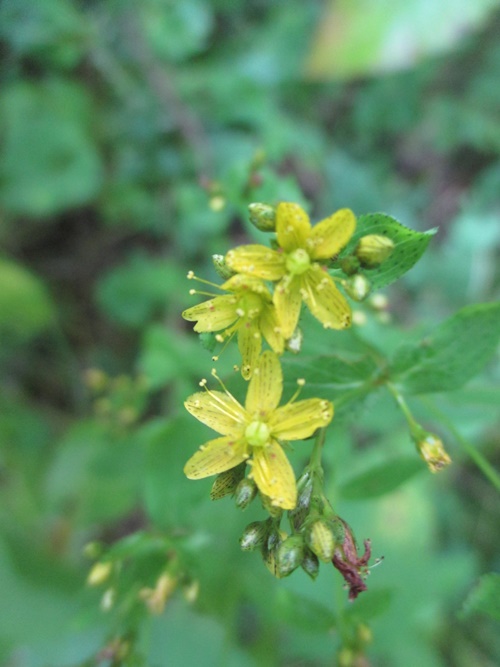 A new arrival to my eyes this far up the holler is one of the dayflowers. I've seen these down near Terry Creek for many years, but not up here. The blue color of this flower is striking, but it only flowers for one day. Maybe I've just missed them. For now I've decided this one is the non-native Asiatic dayflower: 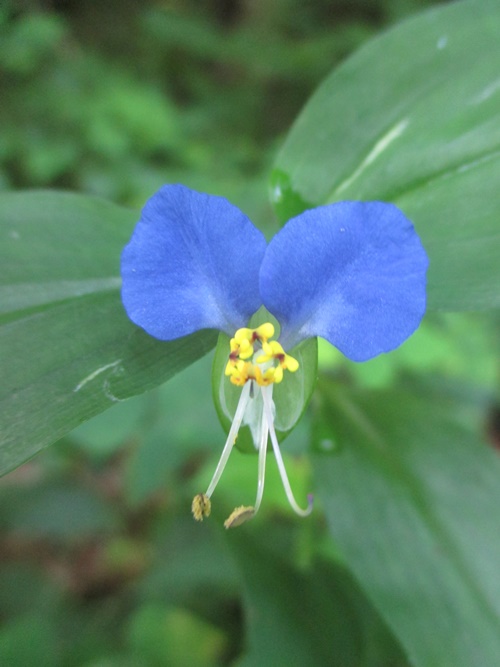 Among the abundant populations around the house and the holler was Echinacea, leafy elephant's foot, orange jewelweed, and the smaller of the two purple aster species that grow here. 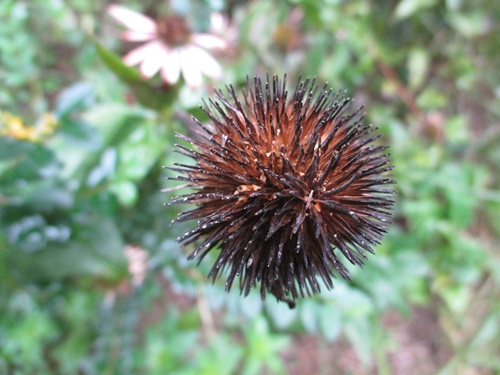 Mature fruit of Echinacea purpurea, some of which has been harvested by goldfinches. August 29, 2018. [Photo: Cathie Bird] 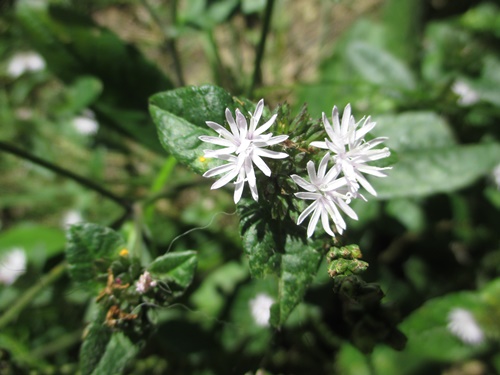 I try to mow around patches of Elephant's foot because it produces a thistle-like fruit that draws goldfinches, white-throated sparrows and other birds to the yard on cold, snowy days.

I observe two different jewelweed plants, both of which are in an area that receives less sunlight than when I began to track them. Compared to larger patches in a sunny area on the opposite side of the lane, the individuals I track did not produce as many buds, flowers or fruits this year. 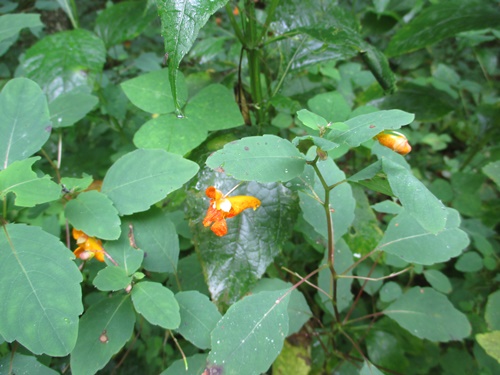 A year or so ago the utility company did a massive clearing of trees and brush around the power lines that run along State Route 297 from Pioneer to Jellico. Since then, populations of small purple asters have flourished. This summer there were tons of them to inspire jaw-drops and wows from me every time I drove to town. I even had some up here in the holler, but I photographed these growing at the end of Terry Creek Lane just before it intersects with TN297: 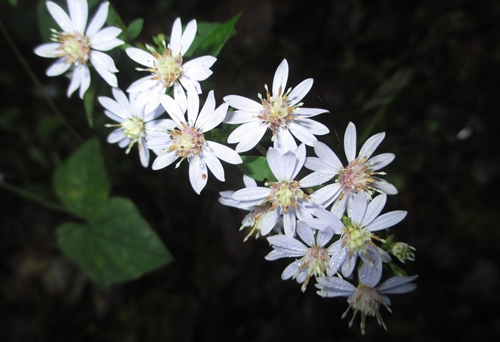 Plants having lower numbers than usual throughout the summer and early fall included white wood asters, lobelia, and goldenrod.

For example, this is about as good as things got for the wood aster I track. Before it could produce any buds, the leaves got holes in them, turned gray-brown and disappeared: 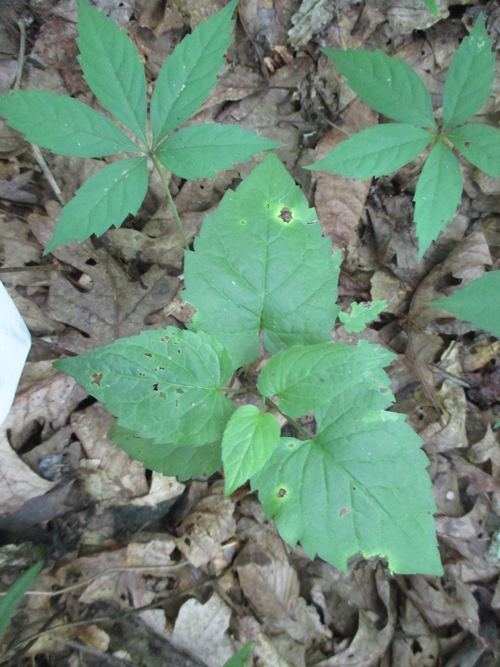 On November 5th, however, I happened to catch activity of a relative just a few feet away, on the other side of the tree from WoodAster1: 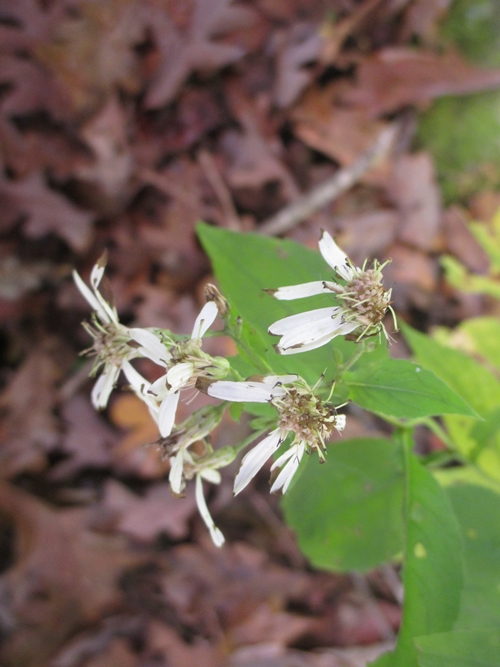 The wood aster a few inches away from this flowering one already had mature fruit: 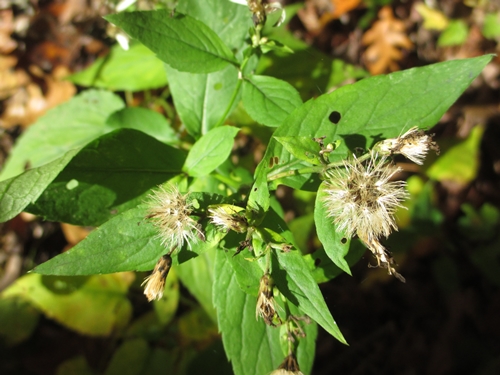 So many factors impact the lives of each individual forb, shrub or tree -- a good reason to track more than one plant of the same species.

Great blue lobelias were also missing in the holler this season. I love these plants. They are photogenic and often have an interesting mix of little bugs and pollinators crawling around on them (though this one didn't have any on the day I walked by): 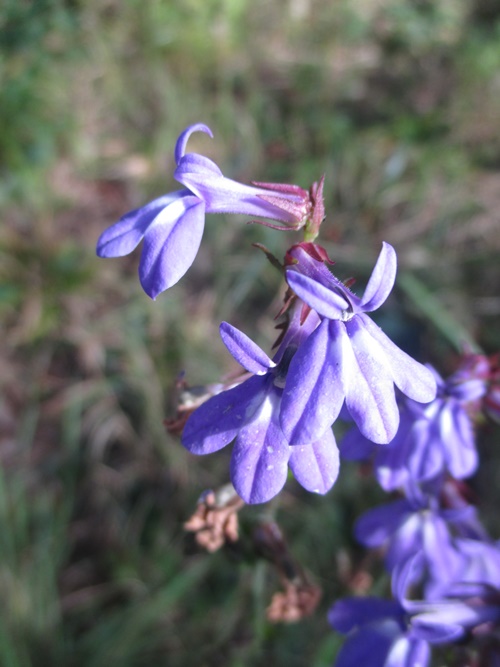 Didn't see as much goldenrod this year, either, and most of what I saw -- at least around the holler -- was early goldenrod: 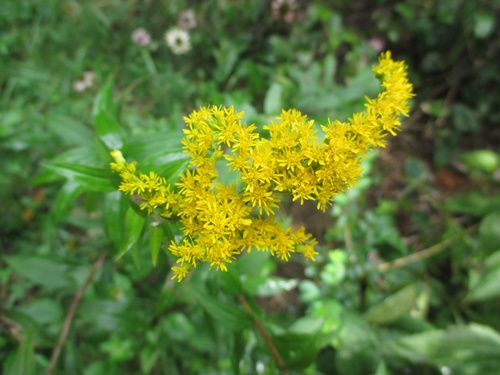 Some of the other plant stories of 2018 that I'd classify under "kind of weird": I didn't see as much heath aster in the holler, and the one I finally spotted was a volunteer in one of my planters. By the time this species starts to come up, they are already surrounded by a lot of other plants, making initial leaves hard to see. In fact I almost pulled initial leaves of this aster out because I thought it was a weed. As it continued to grow, I didn't really notice its distinctive narrow, pointed leaves because they blended in with the little snapdragons that were supposed to be the only residents of that planter. I didn't figure out I had a white heath aster in there until it made flowers: 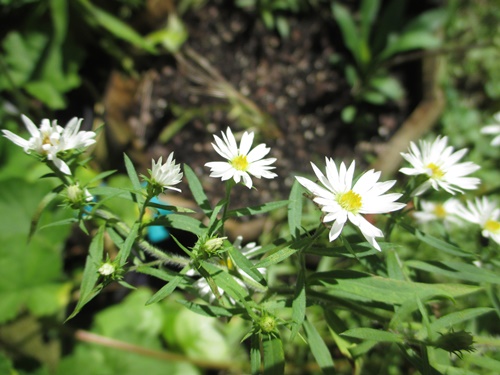 I finally located the real HeathAster1 after it grew taller than the surrounding Echinaceas and the bright white flowers caught my eye. It did not produce a lot of leaves or flowers this year though. I wondered if it had to spend most of its energy reserves just to get up out of the Echinaceas.

And one final weirdness: the mapleleaf viburnams had a tough year for some reason. I track only one of this species, but new viburnams in its neighborhood have been increasing yearly since I began observing them, seeming to do very well. This year, the only one to get all the way to the flowering phenophase was the plant next to the one I track, and it never made fruits.

As the holler slides deeper into fall and winter, I'm thinking about future posts for the slower observation season. I have expanded my Phenology Album at Flickr. In my next post -- unless something unexpected emerges -- I decided to gather images of my Nature's Notebook observation area and its neighboring landscapes to share more of a "whole holler" background for blog posts on species I observe.