A big toad week in the holler

Time to do a toad post! So often I see toads -- especially around my planters -- but don't have a camera. This week the sounds, sights and good fortune capturing images of toads all came together.

My first toad sighting of 2020 was an American toad on May 3rd. Once I start seeing them, I'm extra careful walking or working around my planter garden. However, returning home from town on May 15th, I almost stepped on this Fowler's toad. I went inside quickly to get my camera and found him in the same spot when I came back out: 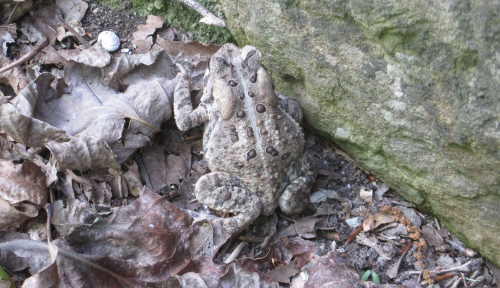 Yesterday, though, was the best toad-watch I ever had. I was coming home from a trip to dump trash, get my mail, and release the seventh mouse I've live-trapped this spring, when this American toad and I startled eachother. I decided to run back to my study and open the window to see if I could get some good photos without disturbing the toad any further.

Between 9:30am and 5pm this American toad hung out below my window. I got more than 150 images and watched it shift around within one square foot of rock and grass, changing positions several times, and even burrowing its hind-end down into some leaves for awhile: 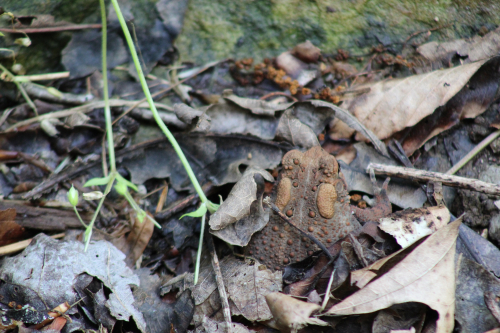 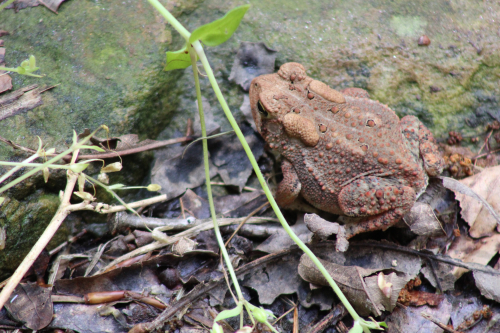 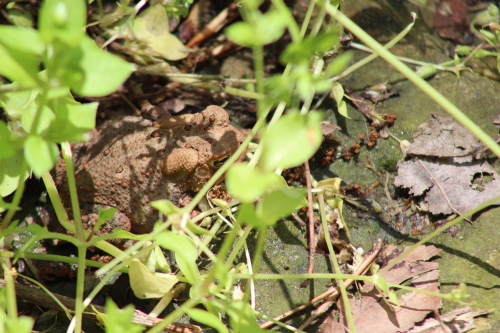 Once I had a chance to study the photos, I didn't feel so sure about my identification of this toad. I cropped a few of the clearest ones to enlarge the view. The lighting in ones I took later in the day kind of threw my judgment of how the cranial ridge appears and whether or not there is a clear space separating the ridge from the parotid gland into question.

A few years ago I made this slide with my own photos and an illustration from the Tennessee Wildlife Resources Agency to help me review the differences. I think I have the appropriate placement of my photos above the illustration -- the toad on the right is A. americanus: 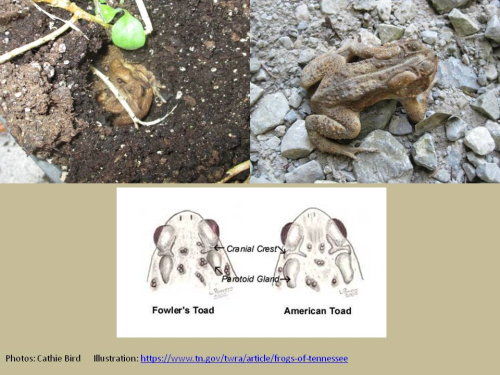 So I'm going to do some more checking before I say I'm comfortable with my identification. When I log this observation at Nature's Notebook, I'll give it a question mark. Whatever this toad is, I hope it keeps hanging out around my planters!

So, a final note about what I heard: The first time I heard a toad call, I assumed it was a bird. My search to discover who was calling out from the edge of the woods went nowhere until I noticed it was not coming from high in the trees, but down at forest ground level. That -- and the observation that the call's pattern and quality was not all that bird-like anyway -- led me to an exploration of frog and toad sounds, and then to my first identification of an American toad by ear. I've heard toad calls several times this week, including three or four yesterday while I was toad-watching. Some clearly sound like American toads, but at least one yesterday may have been a Fowler's toad.

I use these two web pages for help with frog and toad sounds:

The Frogs and Toads of Tennessee Sound ID Page (LEAPS)