Suet thief caught in the act

Recently, I started bringing suet feeders into the house at night because they were being emptied, and probably not by birds. Most of the seed feeders had been showing signs of night raiders as well, but a few adjustments seemed to work to protect those feeders from take downs. Adjusting my timing for restocking ended excessive seed disappearance.

This past weekend, however, the holler went somewhat silent when Shadow, my best friend and watchdog, passed away. I wondered how long it would be until critters I knew were out there in the night holler would start to show up during the day.

Last night, one of those that I suspected as the primary suet-gorger (and feeder-wrecker) came while it was still light enough to get a photo: 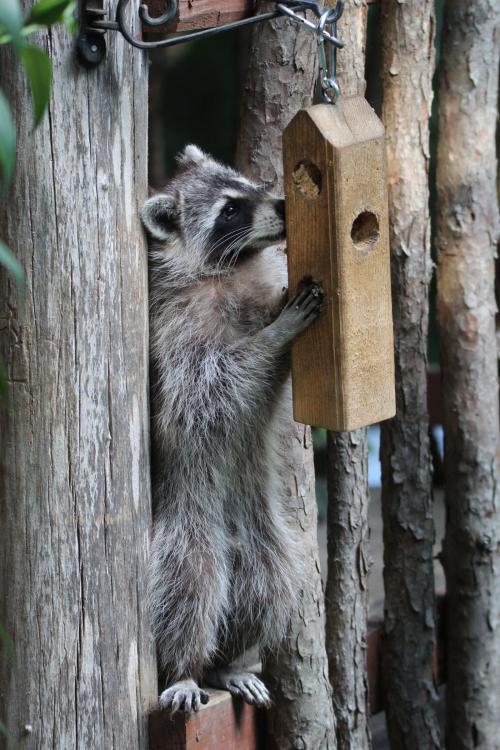 For now I'll probably bring the suet in earlier, but events like this always spark a reassessment of feeding birds and the wildlife that bird feeders may also attract. I'll also watch to see what other animals come closer to the house now. Before I got pets, white-tail deer and wild turkeys came through the yard -- maybe they will again. I've continued to add native flowers and fruit plantings, and reduce (or eliminate) any mowing and brush cutting in areas near the house unless it's for my own safety as I move around the yard. Sometime soon I want to do a post on what I see -- other than plants -- in my planter garden. I'll continue to share thoughts and photos on how I live as a human being and evolve my relationship with all the amazing creatures whose relatives lived around the holler before people did.

Out in the holler: Dafodil leaves and tracks in the mud

I know there are lots of animals that move through the holler, but often the only evidence I see of them is in the soft earth or mud on the lane. It's been busy out there lately. In the photo below, the little tracks on the left were made sometime on the 23rd, and the ones going the opposite direction were there yesterday when I took a second photo. The big track (nice for size comparison) belongs to my Walker hound. 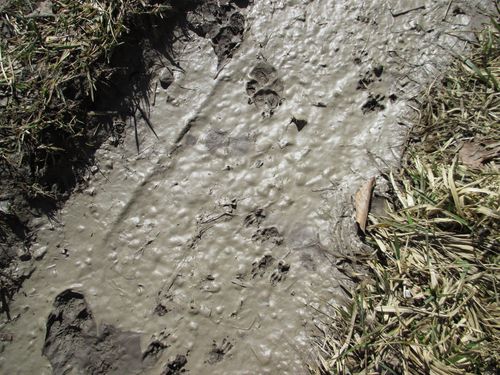 Here's a closer view of the northbound tracks, with an older southbound track in the lower left corner: 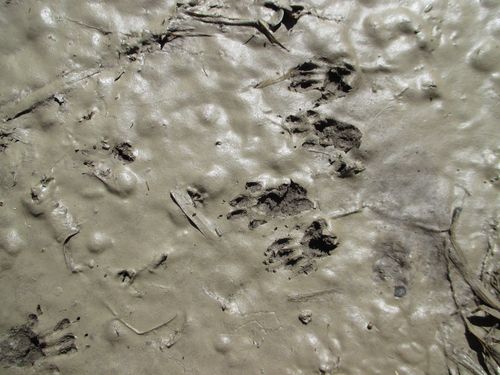 Today on my way down the holler, I spotted some dafodil leaves that popped up some time in the past 24 hours -- just in time for the snow tomorrow: 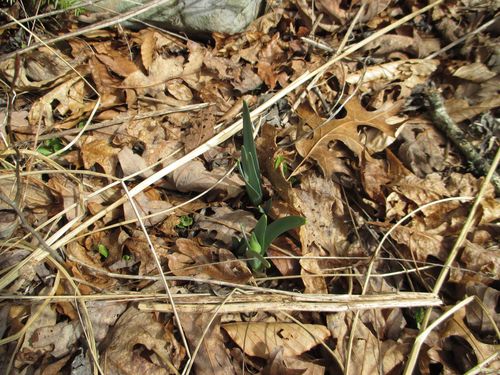 On Saturday the 22nd -- a really warm day here -- I saw my first butterfly of the year, and what I think was a honey bee. At first I thought the butterfly might be one of the commas, but I got close enough later to see that it wasn't. It was really skittery. The coloration was suggestive of a comma or crescent, but it was too big for a crescent. I never did get close enough to identify it.

This winter a large group of eastern towhees has inhabited the holler. I have seen one or two of these occasionally in other years, but never so many. They love the winter tangle of sumac, blackberry canes, multiflora rose brambles, and the stalks of lespedeza, milkweed and virgin's bower along the lane. I almost got a good photo of one of the females the other day, but didn't quite get all of her in the frame. There is a female cardinal that has been hanging out with them as well. Within the past week or so I have heard the first distinctly male calls of both cardinals and chickadees in this new year.

Today the blue jay crowd was pretty busy, so I'm guessing the weather people are correct about the snow on the way in. I am so ready for spring!

I did a post at another blog on the holler's seismic neighborhood if you want to check it out.

USGS: White-Nose Syndrome Bat Recovery May Present Challenges Similar to Those in Some Recovering AIDS Patients

An interesting update on white-nose syndrome from USGS:

Bats recovering from white-nose syndrome show evidence of immune reconstitution inflammatory syndrome (IRIS), according to a hypothesis proposed by the U.S. Geological Survey and collaborators at National Institutes of Health. This condition was first described in HIV-AIDS patients and, if proven in bats surviving WNS, would be the first natural occurrence of IRIS ever observed.

IRIS is a syndrome in which an organism's immune system, having been suppressed for a time, reactivates and, perceiving a serious infection around it, goes into overdrive resulting in severe inflammation and tissue damage in infected areas.

In both human patients with HIV-AIDS and bats with WNS, the functioning of the immune system is severely reduced. For humans, this occurs when the HIV virus attacks the patient's white blood cells, and for bats, this occurs during normal hibernation. For both humans and bats, IRIS can be fatal.

"The potential discovery of IRIS in bats infected with white-nose syndrome is incredibly significant in terms of understanding both the reasons for bat mortality and basic immune response," said USGS Director Marcia McNutt. "This discovery could also prove significant for studies on treatment for AIDS."