Coloring my first experiences in the South

I had mixed feelings about my family’s move to North Carolina. It appealed to my love for exploration and discovery, but meant I would be farther away from extended family and home places. In balance, it was a pretty significant rupture. My anticipatory narratives about the move drew upon military metaphors and American Civil War history that was still, in 1957, less than 100 years old. I was a Yankee. What would happen when people in my new neighborhood found out?

I find a couple of things about this recall quite revealing. What's implied (and confirmed in more recent meditations on these recollections) is that I already had a view of the South and a way to think about living there, all in the absence of any actual experience of such. The narrative suggests I had internalized the North-South conflict -- there's "them" (Rebels) and "us" (Yankees) -- and understood that the Civil War was not really over. 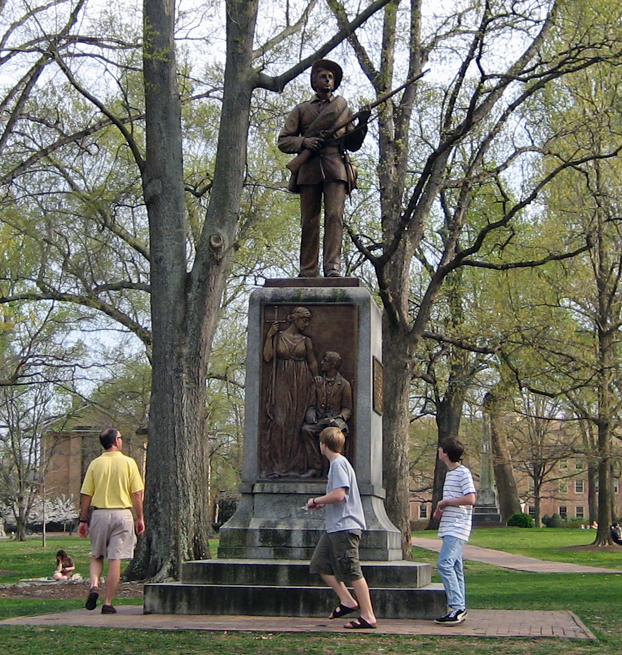 Silent Sam, a controversial statue of a Confederate soldier on the campus of the University of North Carolina at Chapel Hill. As with many other confederate monuments in the South, some see the statue as a symbol of historical remembrance while others see it as a symbol of racial oppression. The monument has been a site of protests since the 1960s. Photo credit: Wikipedia

Equally interesting to me is a sense that people of color had, in my own psyche, either been rendered invisible or otherwise objectified in the worldview I held by age 9.

Over the next few years I would also preserve -- in conscious memory -- experiences that would later make alternative narratives to this colorblindness, this invisibilty, possible:

In Chapel Hill, a gas station near our house had a "No Coloreds" sign on the door. A neighbor who managed a Howard Johnson's gloated about chasing n*****s away from his restaurant with a shotgun. Housing was still segregated, as were public schools, more than 3 years after the decision in Brown v Board of Education (yes, of Topeka, Kansas, an hour-and-a-half from where I grew up).

Under legal pressure, the university had admitted three African Americans to its law school in 1951, and the first undergraduates entered UNC in 1955, two years before we moved there. While UNC laid claim to a progressive attitude toward integration, testimony by Black students who enrolled says otherwise. I vaguely recalled that my parents got involved with a boycott of the Carolina Theater. I decided to do an Internet search to see if I could learn more about civil rights activity in Chapel Hill while we were there, and about this protest in particular. 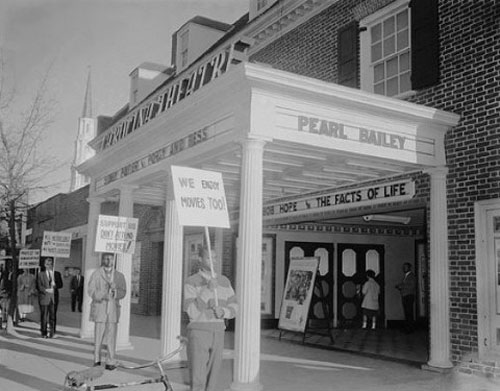 I found a photo and a little about the protest fairly quickly. When I dug deeper to learn about Chapel Hill's demographics in the 1950s and 60s, or who organized the Carolina Theater protest, or who led civil rights work in the community, my initial searches bombed out. However, I eventually found a link to the doctoral dissertation of civil rights historian Yonni Chapman: Black freedom and the University of North Carolina, 1793-1960. Chapman shed some light, in his preface, on my difficulty finding alternative narratives to the white supremacy view that pervaded my experience in North Carolina:

As I surveyed the secondary sources about black lives in Chapel Hill, it turned out that while a great deal had been written about the town and the university, very little had been written about African Americans. Published works generally ignored or distorted black contributions to local history, particularly the black freedom struggle. References in these sources to African Americans were scarce and often patronizing. (xiv)

I also found a reference to organizing by students at UNC that likely related to my parents' engagement in the protests. "In November 1958," writes Chapman, "the Campus Y Human Relations Committee launched an initiative to reduce discrimination in Chapel Hill restaurants and theaters directed against black UNC students." Their fact-finding efforts revealed that the Carolina and Varsity theaters, as well as most of the restaurants in town, had strict segregation policies. After a survey showed that 67% of the students supported equal privileges for all UNC students, four of the group's leaders met with white business owners to negotiate their request for equitable access. According to Chapman, the owners showed signs they were moving toward this goal when negotiations fell apart in February of 1960. Two days later, Black students from Lincoln High School staged a sit-in at the Colonial Drug Store farther west on Franklin Street in the black community.

In Chapman's analysis of this series of events, I not only connected the dots to personal memory, but gained insight into a significant piece of my own story. The shift from a white, rural, conservative culture into a white, urban liberal one happened when my mom remarried and we moved to the university setting of Chapel Hill. I definitely understand my step-dad -- a white liberal sociologist -- as a primary influence on my evolution in this lineage. Chapman caught my attention with these observations:

The evidence seems to suggest that this support was extensive and that some students were ready to put a great deal of work into challenging Jim Crow….At the same time, some of the weaknesses of white student support for black freedom are illustrated by the fact that the Campus Y students were seeking an end to segregation for UNC students only, rather than for all African Americans….As would turn out to be the case time and again, good intentions and liberal methods would prove to be ineffective in the confrontation with power....However, many of the students had their hearts attuned to freedom, and they learned from their failed efforts. In particular, the bold actions of the black high school students seemed to stir many of them to thoughts of more aggressive action. (pp.320-322) 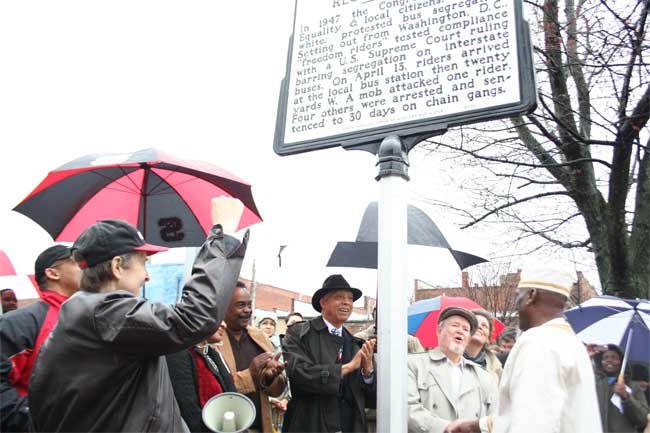 Chapman's work clearly reveals a dynamic presence of Black citizens in Chapel Hill as a key force for racial justice and social change. Yet, in the five years we lived there, I recall seeing only a few Black people, and meeting even fewer. One occasion, in particular, had a profound impact similar in significance to that with the "colored man in Bogue".

At that time we had moved farther from the center of town and the junior high. I usually walked or rode my bike to school. My route took me past the home of a classmate whose family had a friendly cocker spaniel. One morning as I passed by their house, their dog came racing down the hill into the street. At the same moment, a car had made a left turn from Franklin Street, and hit the dog.

I went to the dog immediately to see if I could help. The driver of the car stopped and got out. He was a Black man, probably in his 40's or 50's, dressed in a dark suit and wearing a hat, very similar to the kind my Grandpa Fred and many other men wore back then. I pointed to the house where the dog lived and said I could go up and get someone. I remember that this man was very gentle with the dog, and said he would take care of it. I told him that Dr. Vine's1 office was down the street and that he could take the dog there. He nodded and said several times that he'd take care of it. I helped him pick up the dog and put it into his car. Intuitively, I sensed that he didn't want anyone else involved. I trusted that he intended to help the dog. 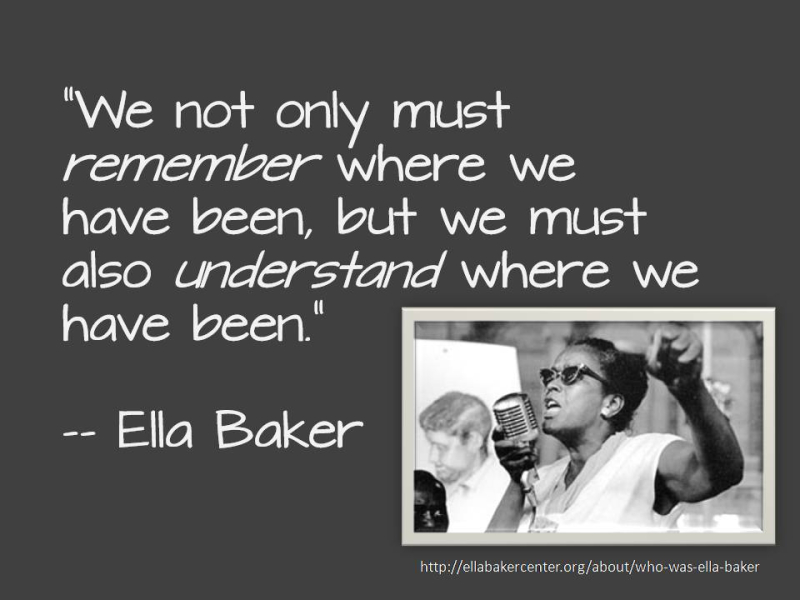 The short story is that neither the man nor the dog ever showed up at Dr. Vine's hospital. My classmate and her family never saw their dog again. Beyond that, I don't know what happened. I felt very sorry that a family lost a beloved pet. Because I assumed that a promise to "take care of it" would include taking the animal to Dr. Vine and re-uniting the dog with his owners, I also felt betrayed.

Another interesting piece of this recollection is that, when I did tell others what had happened, I intentionally avoided saying that the man was Black. Did I do this because I understood how dangerous it was for Black people in this environment? Was it the implicit message I had intuited based on how this man responded? Or some other reason yet undiscovered? I don't know for sure.

I do know that both systemic oppression and the fear-based violence against Black bodies back then continues today in the United States. I don't judge that man for his choices that day. I carry this memory as a reminder that white supremacy hurts everybody.

We left North Carolina in the summer of 1961. That fall, integration of Chapel Hill schools began on a small scale. In researching this post, I listened to many interviews of students who went through this. I can't help but wonder how my life might have unfolded had we stayed longer.

In my next post I'll look at my high school years in a small, mostly white college town in Ohio, and an integrated community in Cleveland suburbs.

1My dream job back then was to be a veterinarian. I had found a mentor in Dr. Louis Vine, whose veterinary hospital was on Franklin Street close to where we lived. I often went over there a few hours on Saturdays, and Dr. Vine would let me watch him treat his furry patients. After each one, I would toss any used materials into the trash and wipe down the exam table with disinfectant. I also helped calm the animals during this process which built the confidence I drew on that day to help that injured dog.

I took some time today to read some of the course and exam description of this "new framework" -- it is fairly explicit about some ideas that have been left out of history classes far too long, for example, development of a "rigid racial hierarchy" in the United States, and exploitation of people who were already here when European colonists showed up.

If you follow links in the article you can get to a number of articles/documents that reveal both sides of the question to explore some of this material for yourself. I hope people will not stop at the surface arguments being raised in TN and elsewhere. We need a fresh analysis that uses new ways of thinking, not the old belief systems that perpetuate mindless, heartless oppression. It's time to dig deep for the buried treasures of history and bring them into the light.

The Republican National Committee in August voted to condemn the new framework and the College Board's "radically revisionist view of American history that emphasizes negative aspects of our nation's history while omitting or minimizing positive aspects."