« The holler's 'shady invaders' -- an update | Main | Songs and flowers in the holler this week: hooded warbler, stonecrop, wood anemone and more violets »

In a post last week, I focused on plants I observe for Nature's Notebook. On more recent holler walks I collected images of some of the other species that live here and have also made the spring shift.

I love it when the apple tree leafs out and blooms. I find the flowers impressive and really easy to photograph compared to others. Beyond that, I know that this apple tree serves other species with its pollen and fruit, attracting insects, deer, and all kinds of birds, including wild turkeys and crows. It's always a little scary when the flowers come early, though. Yesterday the holler had temperatures below freezing. 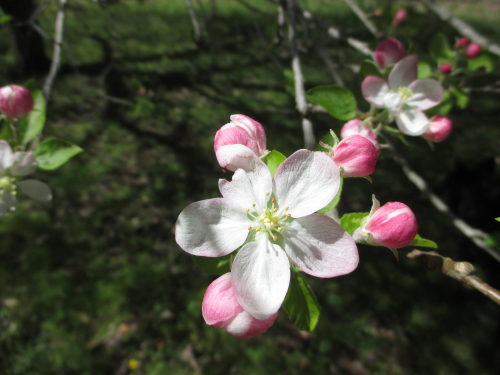 Just down the lane from the apple tree is a flowering crabapple. I mostly see insects and butterflies feeding on this tree. I saw my first bumblebees of 2017 this week around flowers of the autumn olive (see yesterday's post for more on this). Now that the apple and crabapple have flowers, I expect to see bumblebees and honeybees there as well. 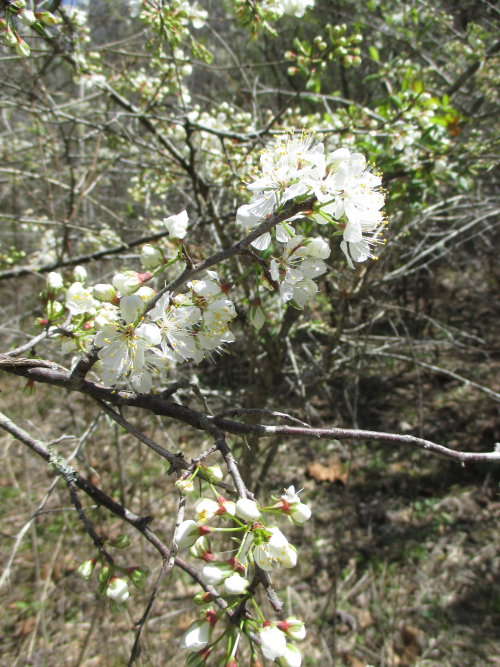 As long as we don't get too many freezing nights in a row, I've noticed that most of the wild flowering plants do pretty well. I recall one year when the apple tree's flowers were wiped out by a succession of freezes. I found it a little heart-breaking and really missed seeing all of the wild beings that use its flowers and fruit. 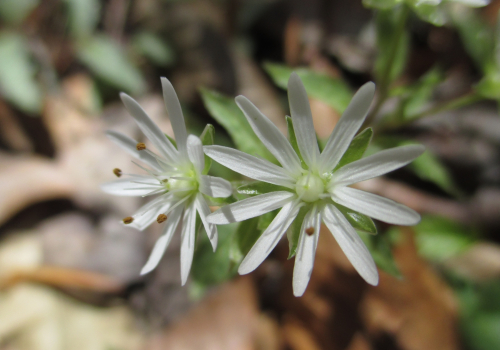 One of two phlox species in the holler entered its flowering phase last week. I believe this is Woodland aka Wild Blue Phlox (Phlox divaricota): 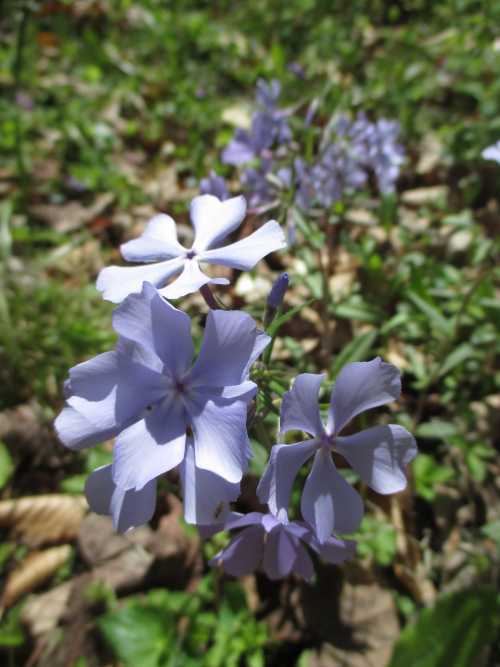 Leaves of the foamflower, a member of the saxifrage family, come out early but take awhile to move into an open flower phenophase. This week I spotted one that has flower buds: 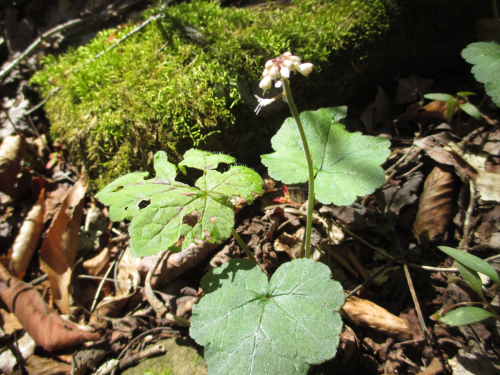 So, for violets, this is the order that holler species generally appear in the spring: Halberd Yellow, occasionally followed by Roundleaf Yellows; then the Sweet White, Common Blue and Marsh Blue; and finally, the Longspur violets that I've seen in just the last 2-3 days. Here's a photo of what I think is Viola sororia, or Common Blue Violet: 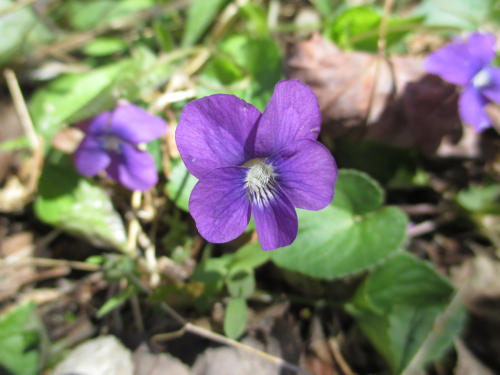 Also flowering in the past 2-3 days is not only one of my favorites but one the West Virginia White butterflies seem to like -- the Wild Geranium (Geranium maculatum): 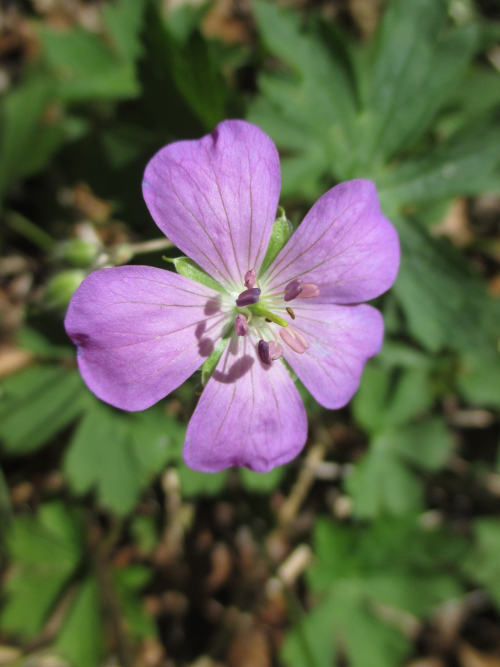 I often see Yellow trillium (Trillium luteum) leaves popping up before the white Trillium grandiflorum, and the yellows are more numerous around this part of the holler. Here's one in its open flower phase: 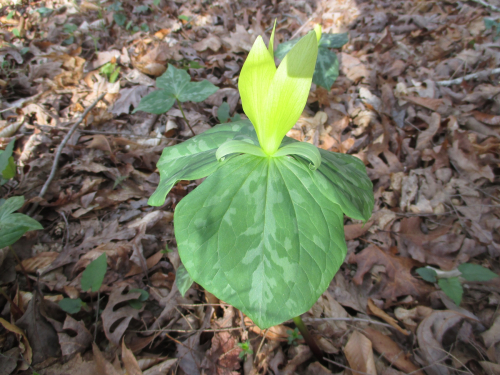 Yesterday I spotted what I think is initial growth of Wingstem-1. I should know for sure in a few days, and, if it is, I think I'll be more confident that I can catch this phenophase in the future: 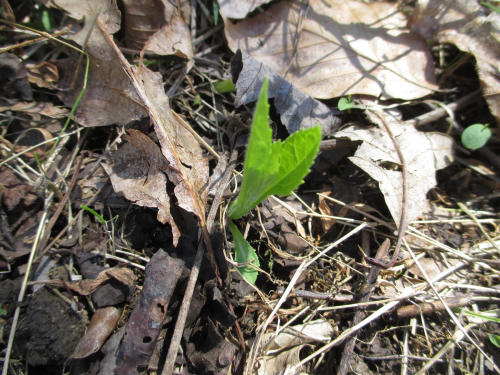 To wrap up this post, I just have to share this photo of a Six-spotted Tiger Beetle: 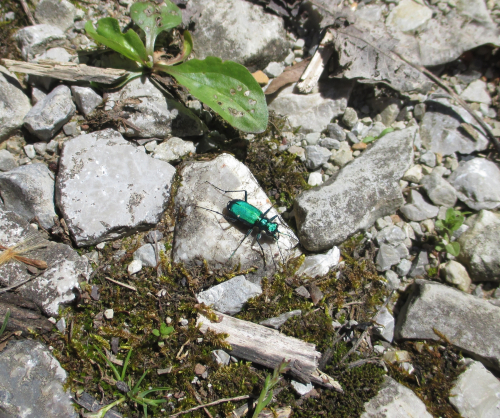 I've seen these in the holler since I moved here 17 years ago, but this is the first time I've gotten close enough, quick enough for a clear photo! Looking at this beetle from several feet away, I thought it was solid green, but a larger image view and plenty of time to look at it revealed the white spots characteristic of Cincindella sexguttata. Information at BugGuide helped me figure out which green beetle it was.